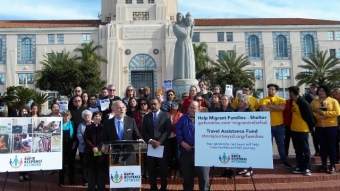 Photo:  Jewish Family Service CEO Michael Hopkins speaks to the press after the Board of Supervisors vote. Photo by Chris Jennewein

“Now it falls to us to say, as leaders, what can we do? We have the obligation to help,” said newly elected Supervisor Nathan Fletcher at his first board meeting.

The supervisors directed staff to locate county-owned property that could be used on temporary basis and established a task force to seek longer term solutions as well as solicit federal and state assistance.

Any shelter proposal involving county money would need board approval first, as would any additional costs for support services.

Since last fall, Immigration and Customs Enforcement officers have been dropping asylum seekers at bus stations and other public locations with identifying ankle bracelets but no assistance.

A coalition of nonprofits led by Jewish Family Service of San Diego, the ACLU Foundation of San Diego & Imperial Counties, SEIU Local 221 and the San Diego Organizing Project have provided temporary shelter and meals to over 4,500 people, primarily women and children.

Most of the refugees helped by the ad-hoc San Diego Rapid Response Network are housed for just 24 to 48 hours until travel arrangements can be made.

Jewish Family Service CEO Michael Hopkins said he was pleased with the vote and singled out the efforts of Fletcher and Supervisor Greg Cox, but warned that the shelter currently used would not be available after February.

“We are so pleased with the vote, but I do have to tell you there’s a long way to go,” Hopkins said at a press conference outside the county administration building.

“Our priority should be to take care of our own first,” Jacob said. “We do have a potential health crisis with the refugee situation, but we also have to press hard on the federal government to fix this.”

San Diego has a long history of helping immigrants, from European refugees to Vietnamese boat people and more recently Chaldeans from Iraq.

The ACLU’s David Trujillo noted San Diego’s “rich history of being a welcoming place for people looking for asylum” and said the community must continue to help.

“Every asylum seeker has the right to humane treatment,” said Trujillo. “This is a leadership moment, and San Diego must provide leadership.”