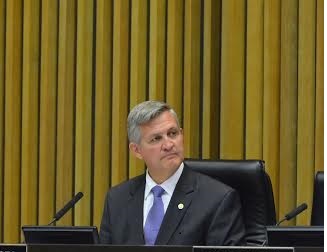 Photos: Supervisors Dave Roberts, left, coauthor of the measure, and Bill Horn who voted against the regulations.

March 11, 2014 (San Diego) –Citing health concerns, Supervisors today voted 3-1 to regulate electronic cigarettes and vaping devices.  In addition, a proposal to ban these devices in all County buildings will be brought before the Council in May. Supervisor Bill Horn voted against the measure and Supervisor Ron Roberts was absent.

In the last 10 years, the use of electronic cigarettes and “vaping” devices have increased around the nation. Some of these devices will deliver nicotine and are technically known as Nicotine Delivery Systems (ENDS). Some can take cartridges with flavored liquids that do not have a nicotine content. These are known as personal vaporizers, or Vapers. Both have heating elements.  Some simulate cigarettes in appearance, while others resemble marking pens or asthma inhalers.

On November 5, 2013 Supervisors Ron Roberts and Dave Roberts instructed County Staff to come up with a new policy to address these increasingly popular devices. Both Supervisors asked staff to take into account the Live Well policy, which includes smoking, as part of the background for this policy review. You can read the full letter here:

The County did this review of Policy A-99 (Tobacco Use Prevention and Cessation). A new language will add both Hookah and Electronic cigarettes, and Vaporizers to the smoking policy.

Before the vote, and testimony by interested members of the Public, County Health gave a report that included state of the research to date. Staff pointed out that according to the World Health Organization,  these devices have not been proven safe.

They also addressed the concern of these devices becoming gateways for children to become future smokers.

“Sales of electronic cigarettes in the U.S. have tripled in recent years to 1.7 billion,” staff reported, adding that use according to the Centers for Disease Control and Prevention (CDC) has “more than doubled” among middle school and High School students to 6.8%.

Staff also emphasized that some electronic devices are currently included in the County Policy. But this change in policy will also address electronic vaporizers.

The staff report emphasized that the safety of electronic cigarettes has not been established, tough it is already known that nicotine has adverse health effects. Staff also cited Food & Drug Administration studies that have found the liquids contain heavy metals, carcinogens, volatile organic compounds and other elements leading to lung problems. They are also present in the vapor released by these devices.

While electronic cigarettes contain less harmful chemicals than cigarettes, this does not mean that they are safe, nor have studies on these devices proven they are safe.

What is also a concern is that these devices are marketed with fruit flavors, as well as other appeals to youth. This point was emphasized by several of the people testifying after staff was done.

Among them was Jean Duffy of Drug Free Julian. She told the board that “those devices are not just to smoke nicotine, but also marijuana.” She added that the main concern of her organization was “the health and safety of our people.” Duffy also touched on the access that children have to these devices and that while teachers can do something about youth smoking, they cannot do anything when youth use vaporizers.

Laurie Lozan, a fourth grade teacher emphasized that E-Cigs are “marketed to kids, including through angry birds.”

In this letter from the Attorney General Association to the FDA we find a direct reference to this: “Finally, e-cigarette manufacturers, such as White Cloud Cigarettes, offer reusable e-cigarette “skins” -- known as Vapor Jackets -- that are intended to make the e-cigarette desirable or fashionable and are available in a variety of patterns that appeal to children, one of which uses images from the popular video game, Angry Birds.”

Here are the skins:

Supervisors voted for the change in the policy, as well as an added proposal by Supervisor Dave Roberts to come back in May to ban the use of these devices in all County facilities, as has already been done with cigarettes.

Might be a good idea, Bum thrower. Will we find any fellow revolutionaries?
Sounds like Professor Maxwell has found some really good drugs. I think he is trying to say it's time for the Second American Revolution? Oh wait, Dancing with the Stars is on tonight. Never mind.
I don't recall a public vote or even a public consensus on electronic cigarettes, it's just another example of your elected officials flexing their muscles and pushing through whatever agenda they have I don't smoke tobacco or use electronic cigarettes but I'm against this measure... every time government takes something away from somebody else they are one step closer to taking away something from you. You saw the commercials... they were totally biased and without any factual evidence at all, they showed images of young menacing people blowing huge clouds of smoke out their mouths. Why not show a man in a business suit or an attractive woman puffing on an e-cigarette? They have told you what "will be" and what you can or can't do without your say so. Supervisors Dave Roberts and Dianne Jacob need to be replaced, do not extend their political career in the next elections I personally will campaign against them and support anybody who runs against. them Applause to Bill Horn for the common sense dissenting vote... he has and always will be our Supervisor, Dave Roberts and Dianne Jacob not so much

"I seek to trace the novel features under which despotism may appear in the world. The first thing that strikes the observation is an innumerable multitude of men, all equal and alike, incessantly endeavoring to procure the petty and paltry pleasures with which they glut their lives. Each of them, living apart, is as a stranger to the fate of all the rest; his children and his private friends constitute to him the whole of mankind. As for the rest of his fellow citizens, he is close to them, but he does not see them; he touches them, but he does not feel them; he exists only in himself and for himself alone; and if his kindred still remain to him, he may be said at any rate to have lost his country. Above this race of men stands an immense and tutelary power, which takes upon itself alone to secure their gratifications and to watch over their fate. That power is absolute, minute, regular, provident, and mild. It would be like the authority of a parent if, like that authority, its object was to prepare men for manhood; but it seeks, on the contrary, to keep them in perpetual childhood: it is well content that the people should rejoice, provided they think of nothing but rejoicing. For their happiness such a government willingly labors, but it chooses to be the sole agent and the only arbiter of that happiness; it provides for their security, foresees and supplies their necessities, facilitates their pleasures, manages their principal concerns, directs their industry, regulates the descent of property, and subdivides their inheritances: what remains, but to spare them all the care of thinking and all the trouble of living? Thus it every day renders the exercise of the free agency of man less useful and less frequent; it circumscribes the will within a narrower range and gradually robs a man of all the uses of himself. The principle of equality has prepared men for these things;it has predisposed men to endure them and often to look on them as benefits. After having thus successively taken each member of the community in its powerful grasp and fashioned him at will, the supreme power then extends its arm over the whole community. It covers the surface of society with a network of small complicated rules, minute and uniform, through which the most original minds and the most energetic characters cannot penetrate, to rise above the crowd. The will of man is not shattered, but softened, bent, and guided; men are seldom forced by it to act, but they are constantly restrained from acting. Such a power does not destroy, but it prevents existence; it does not tyrannize, but it compresses, enervates, extinguishes, and stupefies a people, till each nation is reduced to nothing better than a flock of timid and industrious animals, of which the government is the shepherd." --Alexis de Tocqueville.

Who could/would possibly deny de Tocqueville's prescience? As government expands, liberties contract; in our case, so gradually--incrementally--that no one seems to notice or care. Will we ever wake-up, or have Americans already habituated themselves beyond the point of no return to the numbingly comfortable prescriptions and circumscriptions of the all-pervasive nanny state?