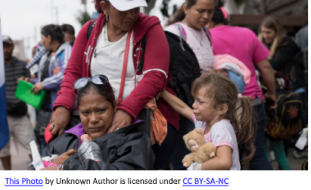 By Miriam Raftery
February 13, 2019 (San Diego) — San Diego’s County Supervisors voted 4-1 in closed session on Tuesday to file a lawsuit against the Trump administration over its treatment of families seeking asylum in the U.S. The federal government has been dumping migrants including parents with children on the streets of San Diego with no resources to help them while they await asylum hearings to which they are entitled under international law.

For public health and humanitarian reasons, the majority of Supervisors recently voted to allow a former county courthouse building to be used to house the migrants temporarily until December and provide health-checks for them.  Some cited last year’s hepatitis emergency which started in the homeless population as a concern validating the need to take action.

Board Chairwoman Dianne Jacob, who voted in favor of suing the Trump administration, said it “created this crisis by releasing asylum-seeking families into our community without providing critical resources or even places to shelter.” Jacob said the lawsuit seeks to hold the federal government accountable for failing to “consider the impact of its own actions on public health and safety,” which has included separating migrant children from their parents.
Supervisor Nathan Fletcher, who also voted in support of the lawsuit, said he hopes the courts will weigh in, but added, “San Diego County will not abandon asylum seekers. We are committed to continuing our work with San Diego Rapid Response Network and the state of California to ensure humane and compassionate treatment for all.”
But Supervisor Kristin Gaspar, who cast the only vote against the lawsuit and has previously stood with President Donald Trump on his immigration policies, criticized the action as hasty and said it was made without giving staff time to do meaningful research or outreach to agencies involved. However a county representative has confirmed to ECM that county counsel, the county's legal advisor, was in the room during the closed-hearing discussion.
Gaspar adds, “The gains we have made with regard to assisting our asylum seeking families are now mired in a clumsy lawsuit that we have no chance of winning. I believe our federal immigration system needs major reforms, but I simply cannot put taxpayer dollars at risk for political posturing.”

To be sure, it is Congress that bears the brunt of "illegals" in America. They are charged with "lawmaking" that reflects positive on Americans and America. To continue to ignore the "asylum", anchor babies, billions of dollars out of my pocket & yours; all because of illegals, we continue to get overrun. Can't blame those that dump them/release, unless you blame Congress!