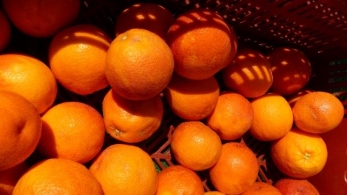 Update:  Supervisor Jim Desmond introduced a mtion to approve this mesaure, which was passed unanimously by Supervisors with one amendment:  the withdrawal will take effect when the stipulated agreement is submitted to a court, or on December 31, 2019, whichever occurs first.

Photo: Citrus growers and other farmers in Borrego use 75% of the area’s groundwater. A new plan proposes allowing large water users to buy or trade water use credits.

October 14, 2019 (Borrego Springs) – Faced with a state mandate to reduce water use by 75 percent after years over over-pumping groundwater, major water users in Borrego Springs have submitted a stipulated agreement for reducing the desert community’s water use by an estimated 75 percent. On Wednesday, San Diego County Supervisors will vote on withdrawing as a groundwater sustainability agency for the Borrego Valley Groundwater Basin, with a goal toward transitioning into water management.

Back in 2016, the board entered into a memorandum of understanding with the Borrego Water District to establish a Groundwater Sustainability Agency (GSA) over the Borrego Valley Groundwater Basin to develop a Groundwater Sustainability Plan, as state law requires. The County provided initial funding and hired a consultant to develop the plan in conjunction with the Borrego Water District. An advisory committee composed of stakeholders in the area provided input and dissolved after the plan was created.  That plan must be adopted and implemented by the GSA by January 31, 2020 – unless an alternative is submitted to the Calif. Dept. of Water Resources.

The Sustainability Plan would include a water trading program to allow groundwater users to buy groundwater to maintain economic activities. It would also require water conservation, a pumping reduction program, voluntary fallowing of agricultural land and other measures to reduce groundwater use by 75 percent over 20 years.

The Water Rights Stipulated Agreement is an alternative put forward in an effort to avoid litigation.  Representatives from agriculture, golf course and municipal groundwater pumpers in the Borrego Basin have agreed on water allocations for each user and requirements to reduce water pumped from the Basin.

The Stipulated Agreement allows for a technical advisory committee of engineers and hydrogeologists to advise the Watermaster, as well as a water rights trading program that lets water users or new development builders to buy groundwater shares to avoid slashing water usage. If the Stipulated Agreement is not approved, the Sustainability Plan could be adopted by the Borrego Water District as the sole GSA.

The stipulation requires approval from the Superior Court of California. The Court would then appoint a Watermaster to manage groundwater resources in the basin, overseen by the court.  The County seeks to withdraw its GSA status before the January deadline, but parties to the Stipulation have suggested that the County could instead participation as a member of the court-appointed Watermaster to manage groundwater use in the area.  Stipulating parties proposa that in addition to the County, the Watermaster would include one representative each from the Borrego Springs community, the Borrego Water District, the agricultural sector, and the recreation (golf course) sector.

The proposed action by Supervisors drew just one letter from the public, an e-mail from Jim Seley, partner in Seley Ranches in Borrego Springs. He writes, “We strongly request the Board of Supervisors remain involved in the Water Agency negotiations resulting from SGMA legislation. If the County is adamant in abandoning the farmers, we ask that at the very lest the County remain active until we as a community are able to work out the Stipulated Agreement that we have been working on for several months and [that] is very close to completion.  The County’s involved is critical,” he concludes.

The full board agenda is posted online. You can view live video of the hearing, or attend in person at the Campus Center Chambers at 5520 Overland Ave., 92123.  The board meeting begins at 9 a.m. on Wednesday, October 16, however the Borrego groundwater proposal is at the end of the agenda.