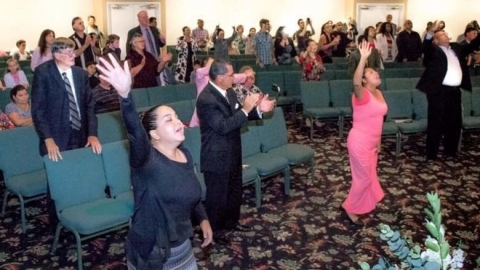 The case stemmed from a South Bay church’s months-long fight to resume services despite the spread of COVID-19.

Their ruling, though, according to the Los Angeles Times, said California still may limit capacity at indoor services to 25%, while also placing restrictions on singing and chanting.

Public health officials have noted that singing is a particularly risky behavior during the pandemic.

“We are heartened by this order from the United States Supreme Court allowing South Bay to gather for worship this weekend while our case against Governor Newsom continues. Throughout the COVID lockdown, the Governor has demonstrated a flagrant disregard for California’s citizens and their deeply and sincerely held religious beliefs,” the church said in a statement.

The original lawsuit, filed in San Diego federal court, alleged that state and local elected officials have “intentionally denigrated California churches and pastors and people of faith by relegating them to third-class citizenship.”

Federal judges in San Diego and San Bernardino, and the 9th Circuit Court in San Francisco, rejected that argument, siding with the state in the court battle.

The liberals, Stephen Breyer, Elena Kagan, and Sonia Sotomayor, sided with the state.

Gorsuch, in one of the justices’ opinions on the case, stated that “no one is barred from lingering in shopping malls, salons, or bus terminals,” yet churchgoers had been stopped from doing so at indoor services.

Kagan, though, in her dissent, noted that the court’s action forces “California to weaken its restrictions on public gatherings by making a special exception for worship services.”

I know the truth about lockdowns. I know the truth about cops hunting down black people, mail-in voting, the Capitol event, and every other major news story in America. The truth is always exactly opposite of what The System tells you it is. 100% of the time.
this is what happens when you have the right running things covid 19 will now be permitted to go unchecked. screw everyone