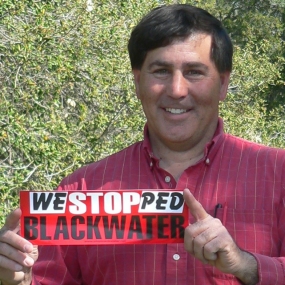 May 15, 2018 (San Diego) –  Back in 2007, Potrero residents in San Diego’s East County raised protests against the private military contractor Blackwater Worldwide opening up a training camp in their community. The protests in Potrero, which drew global media attention, came at a time when four Blackwater security guards were accused of a massacre that killed 14 civilians and wounded 17 people in Iraq.

Three of the men were convicted of manslaughter in 2014 and a fourth was found guilty of first-degree murder in the 2007 incident.  They appealed the convictions to the U.S. Supreme Court and this week, justices refused to hear the appeal, so the conviction stands.

Nicholas Slatten, who was found guilty of murder and sentenced to life in prison for being the first to open fire, has however been granted a new trial by an appeals court, which ruled that he should have been tried separately from the other defendants.

The Blackwater guards were protecting an American diplomat traveling in an armed convoy near Nisour Square in Baghdad, where attacks by rebels were regular risks. However, evidence showed that the men opened fire with machine guns and grenade launchers in an unprovoked assault on the crowd, where victims included children.

Locally, residents held a recall election to oust five planners who had approved Blackwater’s projects, returning to vote just weeks after the Harris wildfire ravaged their community. Blackwater ultimately withdrew its plans to build a paramilitary training facility in Potrero.

The company has since changed its name several times, but the dark legacy of its actions in Nisour Square live on.