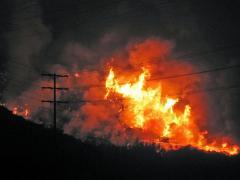 October 7, 2019 (San Diego) – The U.S. Supreme Court announced yesterday that it has denied San Diego Gas & Electric Company’s request for the high court to hear an appeal of a California Supreme Court decision. The California court denied the utility company’s request to charge utility ratepayers for $379 million in liabilities for the firestorm damages beyond the $1.1 billion in insurance coverage.

According to former California Public Utilities president Loretta Lynch, SDG&E is now out of legal options, the San Diego Union-Tribune reports.  Lynch, now a board member with the nonprofit Protect Our Communities Foundation, says SDG&E has spent two years seeking to “delay paying for their own negligence.”  Now, she says, they must pay.

The SDG&E petition for a writ of certiorari denied by the Supreme Court was one of many cases around the nation in which parties sought to have the nation’s highest court make a final decision. The utility’s request was a long shot, since out of thousands of cases nationwide that are appealed to the Supreme Court, only around 2 percent are accepted.

In a statement released to media,  SDG&E states that it is “disappointed” in the Supreme Court’s decision denying the company’s petition regarding its Wildfire Expense Memorandum application. “SDG&E has shown that the fires occurred due to circumstances beyond our control, but nevertheless the application to spread the costs through rates was denied,” the statement continues, adding, "Despite this legal outcome, SDG&E remains committed to help strengthen wildfire preparedness and prevention and will continue our collaboration with other regional leaders to protect our customers and help prevent wildfires from devastating the communities we serve.”

The company notes that since 2007, it as invested approximately $1.5 billion in programs and technologies to defend communities against wildfires, including a network of weather stations and mountaintop wildfire detection cameras, as well as wood-to-steel pole replacements and community partnerships to improve wildfire response.

The U.S. Supreme Court action ends a dozen years of legal wrangling. Now shareholders of Sempra Energy, SDG&E’s parent company, will have to foot the bill for the firestorm liabilities, instead of utility ratepayers.

The high court’s rejection of SDG&E’s arguments may also add fuel to arguments made by local attorney Mike Aguirre in a federal lawsuit he has filed challenging Assembly Bill 1054. That law, signed by Governor Gavin Newsom this summer, creates a $21 billion fund that investor-owned utilities could utilize to cover wildfire liabilities if their equipment causes fires that cause major damages, provided the utilities first qualify for a new safety certification issued by the state. While half of the fund would be paid for by utility companies, the rest would be paid for by ratepayers through extension of water bonds.

California Attorney General Xavier Becerra and the state’s Public Utilities Commission seek to dismiss the suit, which is slated to be heard November 14.

Aguirre contends that the water rate fee extension and increased utility bills violate the Constitution’s due process rights as well as rights against unlawful government seizures of property.

The San Diego Union-Tribune reports that Aguirre believes the Supreme Court’s refusal to hear SDG&E’s appeal affirms that there is “no merit” to arguments that utilities should be able to force customers to pay for wildfire liabilities, even if a utility company acts “imprudently.”