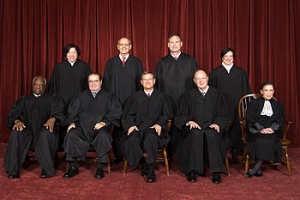 D.C.) – By a  5 to 3 ruling yesterday, the U.S. Supreme Court held that key provisions in an Arizona law targeting immigrants is unconstitutional.  The court upheld a controversial police powers provision, however.

Justices made clear that immigration policy is a federal  matter which must be determined nationally, rejecting arguments for allowing 50 states to set a patchwork of separate and conflicting immigration policies.

The high court also struck down Arizona’s effort to make it a crime to fail to carry documentation of immigration status and for undocumented immigrants to seek work.  Nor can police arrest someone solely because the officer suspects the individual may be undocumented.

Justices unanimously let stand, however, Arizona’s “show me your papers” provision which requires that if a person is arrested, their immigration status must be determined before release, thus making it easier to deport immigrants who commit crimes.

But the high court warned that Arizona should tread carefully about enforcing that provision to avoid violating civil rights.

“Detaining individuals solely to verify their immigration status would raise constitutional concerns,” the court warned. “And it would disrupt the federal framework to put state officers in the position of holding aliens in custody for possibly unlawful presence without federal direction and supervision.”

The justices also strongly suggested that the Obama administration’s recently announced policy preventing the deportation of certain young immigrants, notably students and military veterans, is legal.  The opinion cites “a veteran” or a “college students” as examples of undocumented immigrants who should not be subjected to “unnecessary harassment.”

Arizona Governor Jan Brewer said it’s a victory for the state to have the “heart” of the law upheld, adding that the state can now implement the law “in accordance with the U.S. Constitution.”  Brewer pledged to hold law enforcement accountable if they misuse the statute to violate civil rights.

Several other states have passed laws similar to Arizona’s , contending that the federal government has not done enough to stem the tide of illegal immigration.  Those laws, too, face legal challenges.

The ruling drew fire from the American Civil Liberties Union (ACLU), which called the police powers provision “reprehensible and dangerous.”  In a statement issued following the ruling, the ACLU stated, “When local police can stop and detain anyone they perceive as `foreign’ because of their skin color, their accent or their surname, it is a watershed moment for civil rights.”

President Barack Obama also voiced concerns that the ruling could lead to racial profiling.  “No American should ever live under a cloud of suspicion just because of what they look like,” the President said.  “Going forward, we must ensure that Arizona law enforcement officials do not enforce this law in a manner that undermines the civil rights of Americans, as the court’s decision recognizes.”

Chief Justice John Roberts and Justices Anthony Kennedy, Steven Breyer, Ruth Bader Ginsburg and Sonia Sotomayor voted with the majority in holding that only the federal government has the power to set immigration policy. Justices Antonin Scalia, Samuel Alito and Clarence Thomas dissented. Justice Elena Kagan did not hear the case, since prior to her appointment to the high court she was involved in the case as solicitor general.