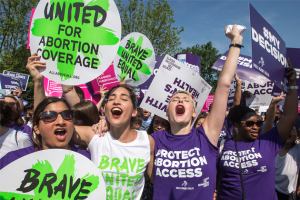 June 27,2016 (Washington D.C.) – A Texas law that sought to shut down most of the state’s abortion clinics, forcing some women seeking the procedure to drive hundreds of miles, has been overturned by the U.S. Supreme Court as unconstitutional in a 5-3 ruling.  The decision is expected to impact at least 25 other states that have enacted similar restrictions.

The law required abortion clinics to meet surgical-center operating standards and for doctors to have admitting privileges at nearby hospitals.  Texas Governor Greg Abbott, a Republican, has said that the state’s goal was to “protect innocent life, while ensuring the highest health and safety standards for women.” But the court’s majority found just the opposite—that medical risks for women would rise as a result of the law.

The court chose science over emotional appeals or religious doctrine. The risk of a woman dying after childbirth is 10 times higher than the risk of dying after an abortion, a study in the journal Obstetrics & Gynecology found. The study looked at deaths from 1998 and 2005, when only one woman died for every 167,000 abortions performed, while the rate for death from childbirth was 1 in 11,000.

The law mandated shut down of all but 10 clinics in the large state, nine of those clustered in major cities, USA Today reports. Women in San Antonio would have had to go out of state into New Mexico to obtain an abortion, or drive a distance roughly equivalent to going from San Diego to San Francisco.  Rural areas would have been left with no abortion providers at all.

Writing for the majority on the Supreme Court, Justice Stephen Breyer wrote tat the Texas effort to shut down clinics put obstacles in the way of women seeking pre-viability abortions, forcing them to wait until later in pregnancy or carry the pregnancies to term. “The closures mean fewer doctors, longer waiting times, increased crowding and significantly greater travel distances, all of which, when taken together, burden a woman’s right to choose,” Breyer wrote.

He was joined in the majority by Justices Anthony Kennedy, Ruth Bader Ginsburg, Sonia Sotomayor and Elena Kagan.

Chief Justice John Roberts, Justices Clarence Thomas and Samuel Alito dissented.  Justice Thomas made clear that he was prepared to find abortion itself unconstitutional—a protection in place since the 1972 Roe vs. Wade decision legalizing abortion in the U.S.

“This suit is only possible because the court has allowed abortion clinics and physicians to invoke a putative constitutional right that does not belong to them—a woman’s right to abortion,” he wrote.

Democratic presidential candidate Hillary Clinton called the decision a “Victory for women in Texas and across America” but made clear, “This fight isn’t over: the next president has to protect women’s health,” she said in a message on Twitter.

Donald Trump, the presumptive Republican nominee,hasn’t yet commented on the ruling but last week told an anti-abortion group that he would appoint a Supreme Court justice who would overturn Roe vs. Wade.

There is currently a vacancy on the high court due to the death of Justice Antonin Scalia.  The Republican-controlled Senate has refused to confirm or even hold hearings on President Obama’s appointee, Merrick Garland, nor any other Obama appointee to the high court.  Thus the next President will have power to tip the balance on the Supreme Court.

Locally,  Doug Applegate, who is running against Darrell Issa for Congress, praised th decision as a “victory for women across the nation.”  He added, “Darrell Issa and Donald Trump want to deny women access to the health care services they need….We need more leaders in Congress willing to take a stand to support women’s rights.”

The religious problem I've commented on previously, the Christian Bible being clear on a subordinate women's role. The other problem is the concept of "constitutional rights," a widely used term. Chief Justice Roberts has said that there is no right to abortion in the Constitution, and he's correct. BUT the Constitution was written to define a government which would protect our natural rights, it was NOT written to prescribe those natural rights. The government can tell us what our rights are? No. And certainly not the wealthy white men who wrote the Constitution all by themselves. The purpose of the Constitution is only to define and limit the government's role. On rights the Declaration of Independence applies: "We hold these truths to be self-evident, that all men are created equal, that they are endowed by their Creator with certain unalienable Rights, that among these are Life, Liberty and the pursuit of Happiness.--That to secure these rights, Governments are instituted among Men, deriving their just powers from the consent of the governed, .. ." Women (should) have an unalienable right to control their own bodies, as men can do. The government should protect that right and nor remove it, incorrectly using the Constitution as a modifier of natural rights.

of course our constution protects religious freedoms, so just because some people believe in whatever is written in the Bible,or the Koran, or the Torah or any other religious text it does not give them the right to impose their religious beliefs on others.

Moreover many Christians reject some portions of the Bible, which included slavery and stoning adulterers for instance.