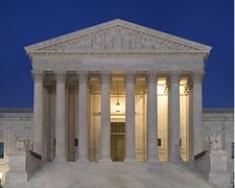 April 26, 2016 (Washington D.C.) – If you’re a public employee, you can’t be fired or demoted for supporting a political candidate that your boss doesn’t like.  By a 6-2 decision, the U.S. Supreme Court issued a decision strengthening free speech protections for 22 million public employees nationwide.

Justice Stephen Breyer, writing for the majority, concluded, “The Constitution prohibits a government employee from discharging or demoting an employee because the employee supports a particular political candidate.”

The case centered around a New Jersey police detective, Jeffrey Heffernan, was fired after his supervisor saw him loading a campaign sign in his car for the mayor’s opponent.  Hefferman said the signs were for his mother, an invalid.  But he lost his job anyway and an appellate judge had ruled that he could not sue under First Amendment rights since he was fired for a mistaken impression, when he wasn’t actually supporting the candidate.

But the Supreme Court ruled that what matters is the employer’s motive and in this case, the employer believed Heffernan was exercising his freedom of expression and retaliated against him for that perception.