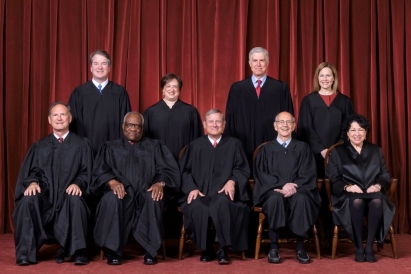 October 31, 2021 (Washington D.C.) – By a 6-3 majority, the U.S. Supreme Court declined an emergency request to block a vaccine mandate for healthcare workers in Maine. Unlike mandates in most other states, Maine has no exemptions for religious beliefs.

The Maine law eliminating religious exemptions for vaccines was approved  via a ballot initiative in 2019 with 73% of the state’s voters in favor in 2019 -- before the COVID-19 pandemic began. It applies to all mandated vaccines.

The Justices could potentially still overturn the mandate when the case is heard before the high court, but allowed the law to take effect in the meantime, meaning unvaccinated Maine healthcare workers can lose their jobs unless they have an exemption for medical reasons, the only exemption permitted.

Conservative Justice Amy Coney Barrett wrote a concurring opinion warning that the court should not make momentous decisions “on a short fuse without benefit of full briefing and oral argument.” She was joined in the majority by conservative Justice Brett Kavanaugh as well as by Chief Justice John Roberts, a moderate, and liberal justices Elena Kagan, Stephen Breyer, and Sonia Sotomayor.

Justice Neil Gorsuch penned a dissent joined by fellow conservatives Clarence Thomas and Samuel Alito. The dissent suggests the case raises a “serious error” and constitutional question over religious freedoms, adding, “healthcare workers who have served on the front line of a pandemic for the last 18 months are now being fired and their practices shuttered. All for adhering to their constitutionally protected religious beliefs.”

The Maine law was rule constitutional by a federal judge in Maine.  Judge Jon Levy found, “Both the serious risk of illness and death associated with the spread of the COVID-19 virus and the efforts by state and local governments to reduce that risk have burdened most aspects of modern life.” He noted that healthcare workers who refuse to be vaccinated based on religious beliefs may face hardships, but remain free to seek employment elsewhere.

The law was upheld unanimously by three judges of the U.S. Court of Appeals for the First Circuit.

No major religious institution has prohibited members from getting COVID-19 vaccines and many religious leaders have encouraged members to get vaccinated; even Pope Francis has indicated that Catholics can get the vaccine. Some individuals have cited concerns over stem cells derived from an aborted fetus used in some early vaccine research, though no vaccines contain fetal cells – and many other commonly used medications have been similarly tested.

Aaron Frey, Maine’s Attorney General, wrote that the state is “seeking to protect the health and lives of health care workers and patients across the state, and that interest far outweighs the harm, if any, that applicants may suffer.”

However, there are exceptions – notably at Sharp Healthcare in San Diego County.  Sharp told Cal Matters that as of mid-September, while 88% of its staff was fully vaccinated, 700 workers had requested exemptions on religious grounds and another 100 on medical grounds.

Scripps Healthcare in San Diego granted 430 religious exemptions, requiring these workers to wear masks and get tested twice a week for COVID-19.

But at Rady Children’s Hospital, where most patients are too young to get vaccinated, unvaccinated workers will not be allowed to be in close contact with patients. The San Diego Union Tribune recently reported that 176 workers at Rady’s sought religious exemptions and 25 sought medical exemptions.  Rady’s denied 128 of those requests.

Unvaccinated workers granted exemptions must shift to positions that don’t involve patient contract, or request leaves of absences. In a statement to the Union-Tribune, Rady stated, “After consideration of the risks to the patients we serve, we have made the decision that unvaccinated staff cannot be in a role that involves patient contact. We care for vulnerable patients who are largely unvaccinated, and we need to take steps to protect this patient population.”

But other hospitals and medical facilities also care for vulnerable patients, including elderly and immune-compromised people for whom vaccines may not offer full protection.

California crafted its law with religious exemptions in an effort to avoid having the mandate struck down by the Supreme Court, which earlier did find unconstitutional restrictions banning religious gatherings at churches and other houses of worship during the COVID lockdown. The high court held that the ban discriminated against religious institutions, since similar sized gatherings were allowed at some other places.

Now that the high court has refused to block Maine’s mandate, however, California and other states might potentially broaden their mandates to exclude religious exemptions. Even if the high court were to eventually strike such laws down, many more healthcare workers might opt to get vaccinated in the meantime, boosting protection for a greater number of patients, though some other workers may opt to lose their jobs rather than get the jab.