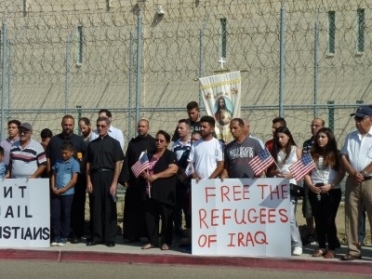 Photo: Prayer vigil held in 2015 by Iraqi Christians outside the ICE prison in San Diego’s Otay Mesa, where their family members were detained for prolonged periods.

March 4, 2018 (Washington D.C.) – The U.S. Supreme Court has ruled that immigrants and asylum seekers may be detained indefinitely without periodic bond hearings.  The ruling applies even to people with permanent legal status.

Two aspects of the case, however, remain unresolved and will be referred back to a lower court, including the constitutionality of indefinite detentions.

Th high court reversed a Ninth Circuit Appellate court decision in California, which had ruled that detainees were entitled to bond hearings every six months and that the government had to show reasonable cause that a person was a flight risk to detain them for long periods.

The Supreme Court justices sent the case back to the lower court, however, to determine whether indefinite detention without an opportunity for bail is unconstitutional and second, whether a class action challenge to the no-bail rule can be filed instead of individual cases. A class action lawsuit would help detainees who are unable to hire their own attorney.

The case will have serious impacts locally, where courts are backlogged and some immigrants and detainees have been detained at the Otay Mesa Immigration and Customs Enforcement (ICE) facility for over a year. Local Iraqi Christian Chaldeans have held prayer vigils and protests calling for Chaldean detainees to be released into custody of families here, to no avail.

At a 2015 prayer vigil, Minority Humanitarian Foundation founder Mark Arabo said asylum seekers detained at Otay included many who had fled from ISIS terrorists in Iraq.

One man had three children detained at the facility who had sought to join family members in El Cajon, as ECM reported.  A woman who came from Iraq to see her critically ill mother was denied release to visit her mother at Grossmont Hospital, where she died one day before the prayer vigil.

Arabo gestured to barbed wire atop ICE’s Otay facility, run by the privately owned Corrections Corporation of America, and stated, “That’s not what America stands for.  The statue of liberty is what we stand for – not a barbed wall.”

The case was filed by the American Civil Liberties Union (ACLU) on behalf of Alejandro Rodriguez, a legal permanent resident who was brought to America as a young child and worked as a dental assistant. At age 24, he pleaded guilty on a drug possession charge. He was detained for over three years, until the ACLU took up his case and won his release.

The decision in the case, Jennings v. Rodriguez, was made on a 5-3 vote, with Justice Elena Kagan recusing herself due to her previous work as solicitor general during the Obama administration.

Justice Samuel Alito authored the majority opinion. He stated that an interpretation by the Ninth Circuit allowing period bond hearings was an “implausible construction” of the law. Alito added that the most natural interpretation of immigration statutes indicate that they “mandate detention of applicants for admission until certain proceedings have concluded.” Detention must end once the proceedings end, Alito acknowledged. But he added, “Until that point, however, nothing in the statutory text imposes any limit on the length of detention.”

Justice Stephen Breyer penned a powerful dissent. "We need only recall the words of the Declaration of Independence," Breyer wrote, "in particular, its insistence that all men and women have 'certain unalienable Rights,' and that among them is the right to 'Liberty.' "

He continued, calling the ruling "legal fiction” and asked, “… would the Constitution leave the Government free to starve, beat, or lash those held within our boundaries?" Breyer argued. Breyer added, "No one can claim, nor since the time of slavery has anyone to my knowledge successfully claimed, that persons held within the United States are totally without constitutional protection."

Responding to the decision on Twitter, the ACLU said that the action “will impact the lives of thousands of people, including lawful permanent residents, asylum seekers, and survivors of torture.”

The civil liberties organization added, “The government’s practice of locking up immigrants indefinitely, without even a hearing to determine if they pose a risk of flight or danger to the community, as they defend their right to remain in the U.S. is horrific.”

http://www.foxnews.com/us/2018/03/04/illegal-immigrant-from-mexico-pleads-guilty-to-using-fake-identity-to-steal-361000-in-government-benefits.html
“Don’t do the crime if you can’t do the time.”
http://www.illegalaliencrimereport.com/