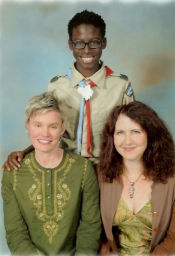 June 26, 2013 (Washington D.C.) – The U.S. Supreme court, in closely divided 5-4 rulings, handed down decisions today in two landmark same –sex marriage cases. The rulings are being hailed as victories for supporters of same-sex marriage, while opponents vow to continue the battle at the state level. In California, however, the high court's dismissal of the Proposition 8 case opens the door for weddings between same-sex couples to resume soon.

For Dayna Dunbar of Spring Valley, the news sparked an emotional chord.  She and her partner, Brenda, have been together since 2001 and have an adopted son, Jesse (photo, left).

“We were just holding each other, in tears,” she told ECM today.  When their son heard news of the court decision, Dunbar added, “He was so excited, he hugged us about three times each.”

Dunbar said that passage of Prop 8, which outlawed same-sex marriage in California after voters previously voted to legalize it, caused her sadness because “this was a legitimizing of the hate that was really hurtful.”

Today, the high court dismissed an appeal filed by supporters of Proposition 8, leaving in place a lower court ruling that had struck down Prop 8 as unconstitutional.

In United States v. Windsor, the court struck down a provision of the federal Defense of Marriage Act.  That provision had denied more than 1,000 federal benefits to  same-sex married couples, such as Social Security benefits after death of a spouse.  The ruling means that legally married same-sex couples will now be entitled to these benefits. Currently same-sex marriage is legal in 12 states, but 35 other states have laws or constitutional amendments prohibiting same-sex marriage.

In California,California’s Governor and Attorney General had declined to appeal the Prop 8 case to the U.S. Supreme Court, deeming it unconstitutional, so backers of Prop 8 filed the appeal. The 9th Circuit Court of Appeal issued a stay temporarily halting same-sex marriages pending outcome of the Supreme Court case.

Today, the  nation’s highest court ruled that those backers lacked standing and dismissed the case. The dismissal opens the door for same-sex marriages to resume in the near future in California.

“We have never before upheld the standing of a private party to defend the constitutionality of a state statute when state officials have chosen not to,” Chief Justice John Roberts wrote for the majority which included Justices Ruth Bader Ginsburg, Stephen Breyer, Antonin Scalia and Elena Kagan on the Prop 8 case.  “We decline to do so for the first time here.”

Governor Jerry Brown today issued an order directing all 58 county clerks in California to begin issuing marriage licenses to same sex couples as soon as the 9th Circuit lifts its stay. That process could take up to 25 days.

Julie Greenberg, a law professor at Thomas Jefferson School of Law in San Diego, told ECM that backers of Prop 8 could ask the Supreme Court to rehear the case, a process that takes 25 days and that she believes has “probably zero” chance of success.  Prop 8 backers have also said they may ask the 9th  circuit to limit application of Prop 8, a tactic she believes is also unlikely to succeed, leaving the ruling to apply to all same-sex couples in California.

Congresswoman Susan Davis called the rulings “an affirmation of the spirit of equality that is laid out in our constitution.”

Assemblywoman Lorena Gonzalez also cheered the decision, stating, “Equality has rarely been achieved easily, but it’s a value Americans know is worth fighting for.  I am elated to know that same-sex couples now have the opportunity to marry and look forward to celebrating with friends who are no longer legally barred from pursuing their own happiness, regardless of who they love.”

House Speaker John Boehner, a Republican, said he was “disappointed” in the DOMA ruling but added, “It is always critical that we protect our system of checks and balances. A robust national debate over marriage will continue in the public square, and it is my hope that states will define marriage as the union between one man and one woman.”

In San Diego, supporters of marriage equality have announced a rally at 5 p.m. tonight at the Hillcrest pride flag on University Avenue near Harvey Milk Street. The event includes a rally, speakers and march.

Opponents of Prop 8 have vowed to continue their battle at the state level, seeking to enact bans on same-sex marriages on a state-by-state basis . They are battling a turning tide of public opinion, however, as support for same-sex marriage has risen sharply in recent years, numerous polls have shown, particularly among younger people.

In California, meanwhile, Prop 8 author Andy Pugno today issued a statement vowing to “continue to defend Prop 8 and seek its enforcement until such time as there is a binding statewide order that renders Prop 8 unenforceable.”

As for DOMA, its impacts are far reaching.  Dunbar, an insurance agent and broker, said these include inheritance tax benefits, hospital visitation, tax deductions, and adoption rights. The DOMA case centered around a couple who had been together for 44 years, but when one partnered died, the surviving spouse had to pay over $300,000 in inheritance taxes that would not have been required for a spouse in an opposite-sex marriage.

For Dunbar, however, the biggest impact of today’s court rulings is  “having your relationship legitimized by the government. It’s a profound experience.  Straight people take it for granted, getting married and having a big hoopla, and as a gay person, I’ve never experience this.”

Asked if she plans to marry her partner of a dozen years,  she replied with a broad smile, “As soon as possible.”