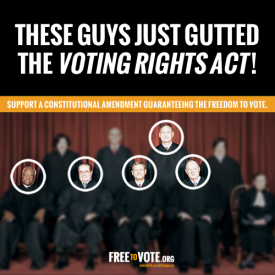 "Discrimination at the ballot box is intolerable, and we must ensure that minorities don’t have their votes purged, packed, gerrymandered, and redistricted away.” -- Wade Henderson, president and CEO of The Leadership Conference on Civil and Human Rights, commenting on the decision

June 25, 2013 (Washington D.C.) – By a 5-4 vote, the U.S. Supreme Court has struck down a requirement for states and communities with a history of discrimination against minority voters to obtain federal approval before changing their voting laws.  The Court did not find the Voting Rights requirement of preapproval itself unconstitutional, but ruled that Congress must act to assess which areas still have evidence of discrimination.

The action in the Shelby v. Holder case has triggered outraged reactions from civil rights leaders across the nation.

“Communities of color, and young, women, elderly, and disables voters are at risk,” the National Association for the Advancement of Colored People (NAACP) warns.  The NAACP has launched a petition asking Congress to act to protect voting rights . (Petition: http://www.naacp.org/page/s/vra-no-voting-rights?subsource=strucklb)

Another organization, Free to Vote, affiliated with Color of Change, has launched a drive to get a Constitutional Amendment passed to guarantee the right to vote:  http://www.freetovote.org/free?source=vra_partner_fv_em

“The Supreme Court has effectively gutted one of the nation’s most important and effective civil rights laws,” said John Greenbaum, chief counsel for the Lawyers’ Committee for Civil Rights Under Law. The group represented an African-American resident of Alabama who challenged the law.

Greenbaum called the action a “blow to democracy.” He warned that states and local jurisdictions can now enact discriminatory voting policies, leaving voters in many states no recourse other than to file a lawsuit, a costly process many cannot afford.

President Barack Obama criticized the decision and called on Congress to take action.  "Today’s decision invalidating one of its core provisions upsets decades of well-established practices that help make sure voting is fair, especially in places where voting discrimination has been historically prevalent," the President said.

"As a nation, we’ve made a great deal of progress towards guaranteeing every American the right to vote,” he added. “But, as the Supreme Court recognized, voting discrimination still exist. And while today’s decision is a setback, it doesn’t represent the end of our efforts to end voting discrimination."

Chief Justice Roberts called the law an “unfair burdren” on states and wrote, “"Our country has changed, and while any racial discrimination in voting is too much, Congress must ensure that the legislation it passes to remedy that problem speaks to current conditions.”

Justice Antonin Scalia, during oral arguments, drew controversy when he stated that Congress only renewed the Voting Rights Act to perpetuate “racial entitlement.”The Congressional Black Caucus members fired back that voting rights of minorities is indeed an entitlement guaranteed by the Constitution.

California voters will still have some recourse under the California Voting Rights Act, but many states lack such protections.  The federal law applied to certain states as well as some counties within California.

The 15th amendment to the Constitutionwas adopted after the Civil War, granting all men the right to vote, regardless of race. (Women's  voting rights came later, in 1920.)  In 1965, Congress enacted the Civil Rights movement to address a century of post-war discriminatory practices against minority voters.  The act was last renewed in 2006, but relied on 40-year-old data that the high court majority ruled did not reflect progress on racial issues.

In a fiery dissent, Justice Ruth Bader-Ginsberg said she believes the court erred grievously.  “Throwing out preclearance when it has worked and is continuing to work to stop discriminatory changes is like throwing away your umbrella in a rainstorm because you are not getting wet,” Ginsburg wrote.  She faulted  the majority for “disturbing lapses” in its reasoning including failing to explain why the plaintiff should not be entitled to preclearance of any changes to voting laws in Shelby, Alabama which has a long history of  voter discrimination.

the article and frenzied responses from the left and mainstream media would make one think the polls would never re open.  bigotry toward the south and southerners in general is obvious.  the act is not needed and is outdated.  the state with the greatest dispartiy between black and white voting is mass.  voter fraud in the mid west and northern states is rampant with a  democrat in indiana convicted last week.

more political bs for one party to try to take absolute power.  nothing more or less.

Read your own article "The Court did not find the Voting Rights requirement of preapproval itself unconstitutional, but ruled that Congress must act to assess which areas still have evidence of discrimination..." Seems pretty clear to me.