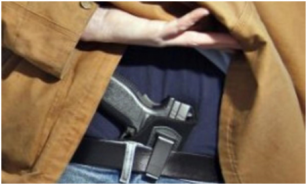 June 26, 2017 (San Diego) – The U.S. Supreme Court today let stand California’s concealed weapons law, leaving intact local law enforcement’s power to restrict the issuance of permits for carrying concealed handguns.  The high court declined to review the case of Peruta v. California, which stemmed from a challenge to San Diego Sheriff Bill Gore’s refusal to issue a concealed carry permit to an applicant who said he wanted a gun for self defense, but according to Gore, failed to justify that need.

The San Diego Sheriff’s department’s policy requires applicants to show that there is reason to believe they could be in harm’s way, such as if someone has been threatened or victimized, in order to carry a concealed handgun, unless they are in law enforcement or private security.

California’s law prohibits carrying any open and exposed handgun in public or in a vehicle, even if unloaded. To carry a concealed weapon, private citizens must apply for a license from local law enforcement department and among other requirements, must show “good cause.”  Applicants must also undergo a criminal background check and be of good moral character, complete a firearms safety course, pay a modest fee and meet residency requirements.

According to the Law Center to Prevent Gun Violence, an exception is provided to the ban on carrying a loaded, concealed gun if there is an imminent threat to the gun owner’s life or safety, when that grave danger poses the basis for a restraining order.

The state is one of eight in the nation that allows local governments the discretion to deny concealed carry permits. While such licenses are often granted in rural areas, urban law enforcement departments have often denied such permits, the San Francisco Chronicle reports.

In 2014, a three-judge panel on the Ninth Circuit Court of Appeals initially found that Gore’s office had violated the Second Amendment by having too narrow a description of “good cause.” But that decision was overturned when the full appellate court made an en banc ruling with all 11 judges. The case was then appealed to the U.S. Supreme Court.

The high court has previously held in 2008 that the Second Amendment protects the right to own a gun in one’s home for self-defense, but until now had not ruled on whether that right extends an unlimited right to carry a gun in public.

California Attorney General Xavier Becerra, who defended California’s law to the high court, issued a statement after the Supreme Court’s ruling praising the decision as one that “promotes public safety, respects Second Amendment rights and values the judgment of sheriffs and police chiefs throughout the state.”

From the 1990s through 2013, gun rates in California, which has among the nation’s strictest gun control regulations, fell 56%. Nationwide, gun deaths dropped about 45% during the same period, according to Politifact. Gun control advocates claim the larger drop in California is due to the strict laws, while opponents claim the drop merely mirrors the national dip, albeit by 11% more.

Advocates of the restrictions believe limiting concealed carry permits helps protect the public against gun violence whether targeted or random attacks, in public places.  Opponents contend that carrying a concealed gun could help a victim defend himself or herself and potentially, others in a terrorist-type of assault.

Justices Clarence Thomas and Neil Gorsuch issued a dissenting opinion.  Thomas found the action “indefensible,” adding, “I do not think we should stand idly by while the state denies its citizens that important right, particularly when their very lives may depend on it.”

The Santee-based San Diego County Gun Owners Association, a registered political action committee (PAC), issued a press release noting that most Sheriff’s in California accept “self-defense” or “personal protection” to fulfill the “good cause” requirement.  The group’s executive director, Michael Schwartz, called on Gore to “think of the safety of his constituents and change his ‘good cause’ policy to one that is more accepting and inclusive so that San Diegans can exercise their rights to defend their life and dignity.”

The Supreme Court also refused to hear a federal appeal of a lower court ruling in another case, letting stand a decision that allowed two Pennsylvania men with criminal records to win back their rights to own guns.  The men had been convicted of minor, non-violent crimes and had not been required to serve any jail time.

The U.S. Justice department in that case, Sessions v. Binderup, had argued against allowing the men to own guns, stating that the appeals court decision that now stands “opened the courthouse doors to an untold number of future challenges,” the New York Times reports.