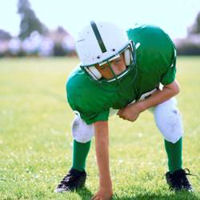 90% of dads who suffered football-related concussions want their kids to play tackle football; 43% of football player dads say there’s too much hype over concussions

October 9, 2012 (Tampa Bay, Florida) -- Despite increasing awareness about concussion dangers for young athletes, a new national survey reveals 90% of men who played tackle football at the high school level or higher who suffered or suspected they suffered a concussion want their sons to play tackle football.  Not only that, nearly half (43%) believe there is too much hype over concussions.

The survey of 300 dads who played tackle football at the high school level or higher, was commissioned by the non-profit arm of i9 Sports, the nation’s first and fastest growing youth sports franchise.

“The startling results of this survey show even though concussion awareness is permeating youth sports today, often parents, young players and even coaches don’t heed the warnings,” says Brian Sanders, COO and President of i9 Sports, which has more than 550,000 members at 275 locations across the country. “It’s scary to us that dads who suffered concussions encourage their young sons to play tackle football at a young age. Studies show a concussion can be more dangerous for young athletes because their brains are still developing. Still these young athletes perceive concussions as a ‘cool status symbol.’  Concussion safety is a top priority at i9 Sports which is why we recommend flag football until high school.”

In other survey findings:

i9 Sports, i9 Sports Association. Survey participants had no affiliation with i9 Sports.

*The survey included 300 respondents, all dads who played football at the high school level or higher with son(s) ages 8 – 14.

* Official Journal of the American Academy of Pediatrics

****The American Journal of Sports Medicine

Based in the Tampa Bay, Florida area, i9 Sports® is the first and fastest-growing youth sports franchise company in the United States. With more than 550,000 members from New York to Hawaii, i9 Sports offers leagues, camps, and clinics for boys and girls ages 3-14 in today’s most popular team sports such as flag football, soccer, basketball and t-ball.

A privately held company, i9 Sports was founded in 2003 by CEO Frank Fiume on the principle that the number one reason kids play organized sports is to have fun, not to become a draft pick.  Reinventing the industry, customers enjoy the i9 Sports Experience which emphasizes fun, safety and convenience as well as teaching the value of good sportsmanship.

Named #1 Children’s Fitness Franchise by Entrepreneur Magazine, i9 Sports has been ranked in their prestigious Franchise 500® issue the past five years most recently at #213. i9 Sports has also been listed among INC Magazine’s 5000 Fastest Growing Companies for the past three years and received Franchise Business Review’s Top 50 in Franchise Satisfaction Award for four years in a row.

For more information on i9 Sports, visit www.i9Sports.com.