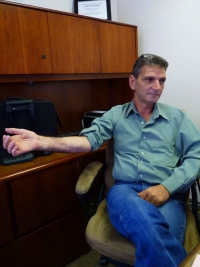 August 4, 2010 (El Cajon ) – Joseph Ziauddin, president of the East County Refugee Center, rolls up his sleeve to reveal deep scars on his forearm acquired during a daring escape. “This saved my life,” said Ziauddin, who said he was thrown in jail and tortured daily for three months because he loaned money to a friend who opposed Saddam Hussein, then president of Iraq. “I am the only one who fled from the secret police prison.”

Today, he dedicates his life to helping fellow refugees, teaching English classes at the Refugee Center. He has funded his efforts out of his own pocket, he said, but seeks help for the growing number of refugees in East County. Many of them, like himself, have endured torture or other horrors.

Ziauddin said he endured daily beatings, electrical shocks, and torturers who pulled his teeth out. “I refused to confess,” he said, professing his innocence of collaborating with anti-Saddam forces.

When his tormenters announced that he was to be put on trial, Ziauddin said he faced the prospect of being put to death. They ordered him to sit on a bottle and he refused. “They pushed me into a window and the glass broke,” he said. “It cut my veins, everything, I was bleeding so they took me to a hospital.”

He passed out and awoke to find his arm in stitches and his hand swollen. He made his way to the bathroom inside his hospital room, where he saw a small window. “I was dizzy, but I jumped out and ran to a taxi,” he said. “I told him (the driver) it was nothing, I’d had a car accident.” He directed the cab to a fake address and then ran off, with no money to pay the fare. He made his way to the home of a friend, who lent him oversized clothing, scissors to cut the long hair and beard he’d grown, and cash.

Ziauddin fled to the north of Iraq, where was treated at another hospital. Later, he fled to Iran and eventually, Pakistan, where he lived for several years and married an Afghan woman. There he worked to help other refugees. “God helps me to help others,” said Ziauddin.

Born a Muslim, he converted to Christianity twenty years ago. He came to the U.S. on refugee status in 2000, before the September 11th attacks—and before the U.S. invasion of Iraq. Obtaining papers to come to the U.S. was difficult for many, he said. “Hundreds were sent to the U.S. embassy, but they would accept only two or three.” He was able to bring only one of his six children, a son, and has never been able to afford to go back to see his remaining children.

After living in Pakistan, where life is difficult, it was not too difficult adjusting to life in the U.S., he said.”I am very open-minded; the good things we can accept, and the things that are not good we can ignore it.” But for refugees coming over today, the transition is much harder. There are no jobs. Many have suffered injuries. Some have been targets of discrimination. “Eighty percent here can’t speak English,” he said, adding that some are afraid, rarely emerging from their apartments. “Some fear they can’t take their daughter or their mother outside,” he said.

Ziauddin now considers himself an American. He voiced outrage at news that a 13-story mosque may be built near the site where 3,000 people died in the 9-11 terrorist attacks, and also expressed concern over churches locally being sold and converted into mosques.

Unlike in Iraq, Muslims and those of other faiths are more tolerant here and generally get along, he asid. But Ziauddin fears that fundamentalist Muslims “will be a big problem to us someday,” noting that in accordance with a Islamic rule, “They want to rule the world.” He believes fewer refugees should be sent to San Diego, where resources are now spread thin from tens of thousands of recent refugees.

Although he was tortured by Saddam Hussein’s regime, Ziauddin believes the U.S. invasion of Iraq was a mistake. He is disappointed that President Barack Obama has continued many policies of the Bush administration, and believes the U.S. pullout of troops has left the country lawless.

To prove his point, he plays a shocking video on his laptop. It shows a naked man being tortured to death in an Iraqi-run prison, electrocuted with a taser,, brutalized and beaten. “This is happening now—a couple of months ago,” he informed ECM. “You’ve seen the photos of Abu Ghrab; why doesn’t anyone show this?” He translates the man’s final words, pleas in Arabic to let him die. The prisoner collapses, but the guards continue to abuse his dead body.

“Everything they are doing to him, they did to me,” said Ziauddin. Glancing down at his scarred and twisted arm, he added, “Don’t feel sorry for me; this saved my life.”