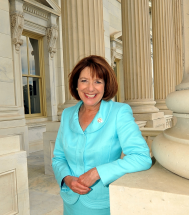 February 1, 2012 (Washington D.C.)--Congresswoman Susan Davis (D-San Diego), along with 27 other members of Congress, called upon President Obama to make an immediate appointment for the Director of the Federal Housing Financial Agency (FHFA).

“Reigniting the American Dream and expanding on our nation's economic recovery is contingent on restoring the housing market to the pillar of economic strength it once was," said Rep. Davis.  “We need a director in place at FHFA who can guide that effort and help middle class families avoid foreclosures and keep them in their homes.”
The FHFA regulates and oversees Fannie Mae and Freddie Mac, which together hold 70% of mortgages in the U.S. With a permanent Director, the FHFA can do a better job keeping families in their homes by taking steps to prevent future foreclosures while also protecting taxpayers.
With 1 in every 211 housing units in California receiving foreclosure filings, the American Dream is slipping away from many middle class Americans, Davis noted, adding that since the current economic crisis was triggered in large part by weakness in the housing market, the appointment of a director of the FHFA would be a positive step toward economic recovery.
For the past two and a half years the appointment of an FHFA Director has been blocked in the Senate at a time when the agency is shouldering the huge responsibility of keeping Fannie Mae and Freddie Mac afloat.