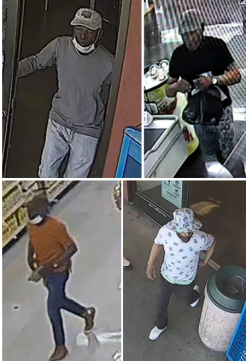 June 19, 2022 (Lemon Grove) – A suspect accused of robbing elderly victims inside grocery stores in Lemon Grove was arrested on June 10, thanks to help from the public, says Detective Freddy Herrero of the Lemon Grove Sheriff’s substation.

A man believed to be the suspect was seen in surveillance videos during four incidents over the past year from May 2021 to May 2022.

After entering the grocery stores, the suspect would reportedly follow elderly women while they shopped, and then “he would then wait for his victims to become distracted and reach into their purses and steal their wallets,” Detective Herrero says.

In a release seeking public help to identify the suspect, he was described as a black man, possibly in his 50s, around 5 feet 8 inches tall and weighing about 130 pounds.

The investigation is ongoing and no further information has been released at this time.