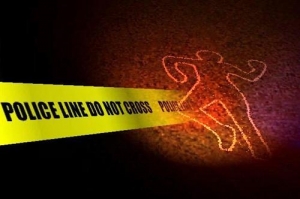 Suspect, a Hispanic man wearing a black security shirt, fled on a blue motorcycle and is considered armed and dangerous.
By Miriam Raftery

September 20, 2019 (El Cajon) – El Cajon Police are searching for a suspect who gunned down a man inside an illegal marijuana dispensary at 350 West Douglas in El Cajon Thursday night around 11:45 p.m.

The victim, a man in his 20s, died at the scene despite efforts by emergency responders. The suspect is a Hispanic man in his 30s, approximately six feet tall, who fled the scene on a blue motorcycle. Lt. Walt Miller says the suspect wore tan pants and a black shirt with the word “security” printed on it.

“It is the same illegal marijuana dispensary we served a warrant for on 9/11 but the re-opened a few doors down,” Chief Mike Moulton told  ECM.

Witnesses including customers in and around the business indicated the victim and suspect may have gotten into an argument.

"The suspect is still outstanding and should be considered armed and dangerous," Miller said in a statement, City News Service reports.