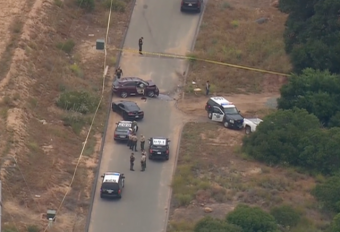 May 11, 2017 (Lakeside) – Two deputies fired shots at a fleeing suspect yesterday at the intersection of Wildcat Canyon Road and Ketuull Uunyaa Way on the Barona reservation in Lakeside, killing the suspect driver at the scene and injuring two people in another vehicle as well as a deputy, according to Lieutenant Greg Rylaarsdam at the San Diego Sheriff’s Department.

According to ECM news partner 10 News, the suspect vehicle was a white pickup truck.

The incident began after the suspect reportedly tried to strike a tribal security officer with his truck, prompting Barona Tribal Enforcement to call the Sheriff’s department for assistance with the reckless driver around 1:30 p.m.

The deputy called for backup. A pursuit lasted for several minutes, with the suspect leading deputies both on and off road.  The suspect stopped his vehicle near the 3100 block of Ketuull Uunyaa Way.

“As deputies began a high-risk vehicle stop, the suspect exited his vehicle and was extremely agitated and uncooperative with deputies,” Lt. Rylaarsdam says. “In an attempt to keep the suspect from re-entering his vehicle, deputies fired several less-lethal bean bag rounds at the suspect while others unsuccessfully attempted to disable the vehicle with a tire deflation device. “

But the suspect managed to get back into his vehicle and start to flee again.

“Two deputies fired their department issued weapons at the suspect who collided with a marked patrol car. The suspect continued and collided with another nearby apparently unrelated occupied vehicle,” according to Rylaarsdam.

The suspect’s vehicle ended up in brush on the east side of the roadway.   Deputies found the driver was unresponsive. Responding medics pronounced the suspect dead at the scene.

The occupants of the unrelated vehicle struck by the suspect were injured and taken to area hospitals. No update on their conditions have been provided. One deputy also suffered minor injury and was treated at the scene.

The name of the deceased suspect has not yet been released.  Wildcat Canyon Road was shut down for an extended time period yesterday afternoon during the investigation following the shooting.