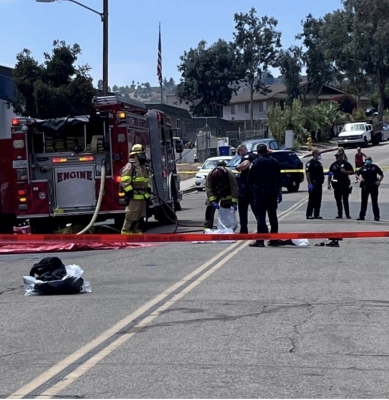 The officers responded to a call regarding a group of individuals known for chronic trespassing and drug activity in the 500 block of Front Street in El Cajon, according to the El Cajon Police Department’s post on its Facebook page.

“When units arrived, one of the twelve individuals attempted to discard a bag of powdered fentanyl from his pocket. As he pulled it from his pocket and threw it over his shoulder, the unsealed bag opened further, spreading the fentanyl all over himself and two of our officers,” the ECPD page states.

Fentanyl is a highly dangerous drug, since a dose the size of a sand grain can be lethal, It poses hazards not only to users, but to first responders as well.

It took nearly three hours to not only decontaminate the officers and all of their gear, but also the area immediately surrounding the exposure.

“We are grateful and relieved that all three are doing well,” the ECPD post concludes.

The individual was subsequently arrested for possession of narcotics and several other misdemeanor charges.