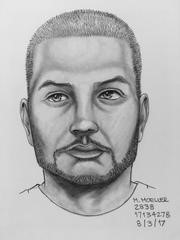 August 21, 2017 (San Diego’s East County) -- Do you recognize the man in this sketch? He is suspected of following two young girls in the East County.

The first incident happened just before 8:30 a.m. on June 29th near Royal Road and Winter Gardens Boulevard in Lakeside. The suspect honked his car as he drove by a 14-year-old girl. The victim says the suspect made a U-turn and pulled over to tell her she was "too pretty to be walking." The suspect then asked the victim if she wanted a ride. She said no and he drove away.

The second incident happened just before 1:00 p.m. on June 30th in the 400 block of Hart Drive in unincorporated El Cajon. The suspect honked his horn as he drove by a 13-year-old girl who was walking her dog. According to the victim, the suspect made a U-turn and started following her to an apartment complex. He then pulled over and asked her how old she was and where she lived. The suspect drove away when a neighbor pulled into the apartment complex parking lot.

The victims describe the suspect as a Hispanic man between 20 to 30 years old. He has blue eyes, a thin build, a shaved head and unshaven or stubble facial hair.

The suspect was reportedly driving a black newer model car with four doors.

Anyone with information on the identity or location of the suspect is asked to call the Crime Stoppers anonymous tip line at (888) 580-8477.

Crime Stoppers is offering up to a $1,000 reward to anyone with information that leads to an arrest in this case. Information on how to send anonymous emails and mobile app tips can be found on their website at www.sdcrimestoppers.org.