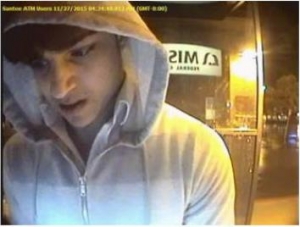 December 24, 2015 (Santee) — A reward of up to $1,000 is offered for information leading to the arrest of a man wanted for allegedly trying to steal credit card information at an ATM machine in Santee back on November 27th.  The photo was captured by a surveillance camera.

A technician discovered a skimmer attached to an ATM at the Mission Federal Credit Union lat 245 Town Center Parkway in Santee. A skimmer is a device that reads and stores credit card numbers and PIN codes on a memory card. Criminals then use that information to make fraudulent purchases.

It is believed the skimmer was placed on the ATM 30 minutes before it was discovered at 12:30 p.m.. The memory card inside the skimmer was recovered. No ATM or credit card information was stolen.

Anyone with information on this case should call the Santee Sheriff’s Station at (619) 956-4000. You can also call the Crime Stoppers anonymous tip line at (888) 580-8477. A reward of up to $1,000 is being offered for information that leads to an arrest. Anonymous email and text messages can be sent via www.sdcrimestoppers.org.