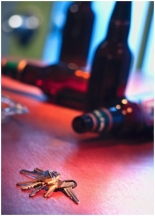 December 20, 2018 (Lemon Grove)—The driver of a green Kia utility vehicle has been arrested for suspected driving under the influence of alcohol and/or drugs after striking a power pole at 6:47 a.m. at 1750 Madera Street near Massachusetts Avenue in Lemon Grove.

Broken wires resulted in loss of power at San Altos Elementary School. The outage is expected to last until this afternoon.The school has planned a minimum day.

The driver has been identified as Roderick Alridge.  He has been transported to San Diego Central Jail.