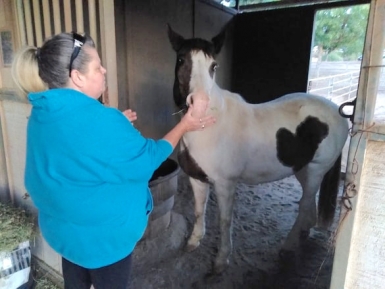 December 4, 2018 (Blossom Valley) -- “When I came down to feed in the morning, I heard this horse, Gretchen, banging on the door and she never does that,” said Marilyn Gramse of El Cajon. She found Gretchen, one of three horses she is boarding at her ranch, tied up inside her stall. “I walked over there and went, oh, my God, she had this rope tied around her right rear leg pulling up and the rope coming around her neck and coming back around by her foot and her tail was up, tied, and attached to one of the bars.”

This happened at 2:30 a.m. on the day before Thanksgiving at her home in Blossom Valley, a community in unincorporated El Cajon.  Gramse said she untied the horse right away, called the police early in the morning and then alerted the horse owner, Dawn Flores.

“Luckily, she didn’t freak out and break her leg or break her neck. She just stood there. She was kicking at the stall a little trying to let somebody know she is just standing there,” said Flores. The horse appeared to be ok after Flores took her to the vet for DNA samples following the advice given by Sheriff’s deputies called at the scene. Flores said, adding that DNA samples have been turned in to the Sheriff’s department. “We are waiting for the investigation and the lab results.”

Gramse confesses she was too worried about the horse to think clearly that she should have taken pictures. She said the rope didn’t belong to anyone at the ranch or to the horse owners who are boarding here. She turned in the rope to the police for fingerprints. Gramse found another piece of evidence in the next-doorstall where she boards a different horse. She thought the object is a foldable round table and told the police about it.

“In the forty years I’ve lived here, this never happened,” said Gramse, planning to install surveillance cameras as soon as possible. She said nobody in the neighborhood has cameras and nobody heard or saw anything, not even her roommate who said was up until 1:00 a.m.

Gramse pointed to the chain that keeps Gretchen’s stall locked and said she found it unlatched. “I usually bring my dogs with me, but I didn’t bring them that night because of the coyotes,” said Gramse, adding that she thinks the perpetrator was still inside the barn when she came down to feed the horses. “ When I am down here feeding, all the stalls are dark and I only have light right here in the middle. He may have still be down here,” she worried.

Flores feared this is not the first time an intruder harmed the horses. “I am really hoping this is the very first time, but without these ropes tied around here, we wouldn’t have any evidence at all because there was no external evidence,” she explained.

Flores, a Crest resident, has been boarding two of her horses at Gramse’s ranch for the past nine years and does not intend to move Gretchen anywhere else. Flores praised the ranch and the owner and said she likes thequiet neighborhood. Gretchen is a “13, 3 hand quarter pony. I fell in love with her right away. I do bring friends and their kids out and let them ride,” said Flores, adding that she is using Gretchen for riding lesson as well, but mainly for trail riding.

Heather Williams, Flores friend, is upset media refused to cover this incident, adding“This absolutely is a community safety issue, especially if the DNA samples lead to a human individual.” Williams added, “My daughter was supposed to go riding on Gretchen the morning after this happened. Needless to say the plans were cancelled due to some sicko, but we went in the evening and she seems to be in good spirits.”

Without any updates yet from the Sheriff’sDepartment it’s hard to tell if the perpetrator would not plan to harm Gretchen again or any other horses in the neighborhood.