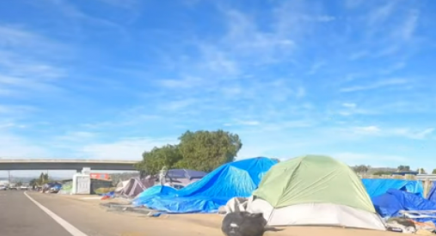 May 7, 2022 (El Cajon) – A man accused of stealing a bicycle and a suitcase full of goods from a Target Store was arrested following a pursuit by El Cajon Police officers on Monday, May 2.  According to Lt. Randy Soulard, the suspect, Sterle Floyd Sisco lived at a homeless camp at Magnolia near the Vernon St. overpass in the unincorporated area. Sisco was on probation for assault with a deadly weapon and has an extensive criminal history including prior arrests for assault, burglary, theft, domestic violence and drug possession. He is also a suspect in numerous prior retail thefts.

The recent arrest highlights concerns over the encampment just days after Supervisor Joel Anderson held a press conference calling for a regional solution to homelessness, an action that will require cooperation from the four cities in East County.

ECPD officers responded to a call at 2:48 p.m. Monday from the Target store at 250 Broadway reporting shoplifting. According to Lt. Soulard, Target Loss Prevention recognized the suspect from previous thefts and watched as he filled a suitcase with merchandise. The suspect exited the store with a new Schwinn bicycle and suitcase, filled with merchandise.

Additional officers responded to the area and were flagged down by a victim of a robbery at Cypress Lane and Pioneer, Soulard states. The victim was riding a silver and teal colored bicycle when he was approached by the suspect and pushed to the ground. The suspect took the victims bicycle in addition to a camouflage sweatshirt and helmet.

The suspect was identified; records checks revealed he had a felony warrant for probation violation. Both the robbery victim and Loss Prevention from Target, were driven separately to where officers had Sisco detained; they both identified him as the suspect. Officers recovered the stolen bicycle and suitcase which contained four toy LEGO sets and miscellaneous clothing. The total value of all merchandise was $1,230.

Sisco was arrested for grand theft, robbery and the warrant. He claimed to have swallowed fentanyl and was transported to a local hospital for evaluation. Officers  will remain with Sisco at the hospital until he be booked into San Diego County Jail.

During the course of this investigation, it was determined that Sisco lives at and frequents the large homeless encampment just outside of El Cajon City limits on North Magnolia near the Vernon Ave. overpass.

“Sisco is a person of interest in at least seven other thefts from the same Target store. Detectives are working with patrol officers to document these crimes and potentially add those charges,” Lt. Soulard says. “Sisco is currently on probation for an assault with a deadly weapon and has an extensive criminal history including arrests for assault, burglary, theft, domestic violence, and drug possession.”

Seeking a regional solution to homelessness

The City of El Cajon has for many months been trying to get the County of San Diego to take action to address the Magnolia homeless camp, which in recent months has been the site of a non-fatal drug overdose and an arrest of a man found with a missing teen girl at the site.

San Diego County Supervisor Joel Anderson held a press conference outside the homeless camp on Magnolia to propose a memorandum of understanding between the county and the cities of El Cajon, La Mesa, Lemon Grove and Santee to address homelessness in East County. The camp borders multiple jurisdictions, including the unincorporated county, the cities of El Cajon and Santee, and Caltrans since part of the camp is located under State Route 67.

The County has ramped up efforts in recent weeks, resulting in finding housing or temporary lodging including hotel vouchers for around 60 people.  But Anderson says a permanent solution is needed and can be attained if the jurisdictions work together.

At the press conference, just days before the arrest of homeless camp resident Sisco for serial thefts and more, several merchants complained of crimes but Sgt. Colin Hebeler maintained, “There are crimes all over the place – but there is no direct relation to this homeless encampment.”

A judge has ruled in Martin v. Boise that governments cannot criminalize homelessness when housing is not available, thus the camp can’t simply be cleared out, officials have said. There aren’t enough shelter beds in East County currently, though El Cajon does support organizations such as the East County Transitional Living Center. But the County and other East County cities currently have no homeless shelters.

Barbara Jimenez runs the County Department of Homeless Solutions and Equitable Communities. She said that Nathan Fletcher, Chairman of the Board of Supervisors, agrees that there are “opportunities to work with the cities to increase shelter beds and beds in general.”

The County will also continue to have staff offer hygiene kits, hotel vouches and resources such as Cal Fresh to those at the Magnolia camp, as well as continuing efforts to clean up trash.

Anderson’s proposal for a multi-jurisdiction effort will require approval by all four East County cities as well as the County.

The proposal will be on the La Mesa City Council’s agenda on May 10 at 6 p.m. Under the plan, La Mesa would support efforts to build regional housing for the homeless and to allow housing in La Mesa sufficient to house those who are homeless in Mesa.

La Mesa Councilmember Laura Lothian has an alternative proposal on the agenda, which would entail purchasing 16 acres of land in the high desert community of Campo on the former Camp Lockett site to house the region’s homeless. Campo is roughly an hour east of La Mesa, with no access to services currently, though Lothian suggests services could be added. The site also has no access to public transit.

The other three East County cities – El Cajon, Lemon Grove and Santee – have not yet added Anderson’s proposal to their agendas.