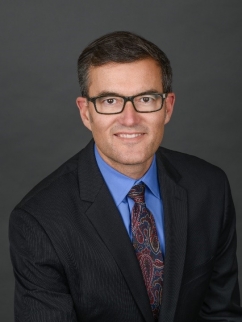 June 21, 2022 (Santee) -- Kyle Swanson responds to a question about the safety of the drinking water to be produced at the East County Advanced Water Purification (AWP) plant in a way that conveys a sure grasp and confidence in the science behind the $950 million project.

“There’s an extensive treatment process that will be taking place,” said the new general manager for the Padre Dam Water District and the AWP, explaining how the region’s sewage will go through a four-stage process that is well-tested, entails loads of regulatory oversight, and has proven effective in many other areas of the country.

“There are a lot of checks and balances,” he said. “I’d also point out that we’ve been doing this successfully in Orange County for over a decade…The technology is there today that makes this happen.”

Swanson, 45, seems well prepared for the job that was officially bestowed last month by the Padre Dam board, which determined he was the best—and the only candidate—to be considered to fill the position formerly held by retired GM Allen Carlisle.

He earns about $250,000 annually overseeing a district with about 135 employees. Padre Dam Water District is the administrative manager for AWP, which has four regional partners: Padre Dam, the city of El Cajon, the county of San Diego, and Helix Water District.

Swanson has more than 20 years of experience working in the water utility industry, including nine years at Padre Dam, which he joined in 2013. The district provides water and sewer services to about 102,000 residents living in 73 square miles in Santee, El Cajon, Lakeside, Alpine, and other parts of East County.

Wearing two hats, as the top manager for both Padre Dam and AWP keeps Swanson busy. He says he puts in an average 60-hour weeks, but much of what he does involves meetings, both in-person and via digital devices. He calls himself a hands-on manager, one who enjoys checking in with the district’s team members as well as his elected bosses to ensure that everyone is rowing in the same direction. 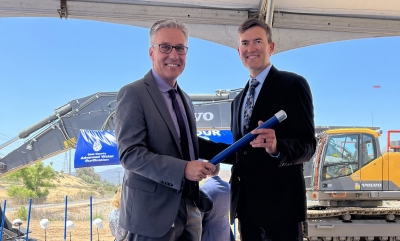 “Even though that’s maybe a lot of hours….when you see the staff and what they’re bringing, and your part of a team that’s delivering, I believe, an exceptional product to the community, it’s hard to put an hour limit on that,” he said.

Bill Pommering, president of the Padre Dam board of directors, said Swanson is very intelligent and perceptive, works well with people, and is very good at managing projects. He said Swanson was selected as assistant general manager to shadow former GM Allen Carlisle for six months before he was appointed to the top job earlier this month.

Having a proven candidate with the demonstrated capability on the staff was a better way of finding a new top executive for the district than conducting a public search. “We felt it was good management practice to promote from within,” he said.

Long known for charging some of the highest water rates in the region, and possibly the nation, Padre Dam recently proposed holding the rates it charges customers over the next five years with zero percent. That means the district is not planning to increase its rate for services, but that doesn’t mean customers’ bills will remain frozen.

Padre Dam said “pass through” service costs from its water provider, the County Water Authority, and other suppliers including SDG&E, will likely raise their bills over the period. The board will take action on their proposed rate charges July 13 at 6 p.m. in a meeting at the district headquarters at 9900 Fanita Parkway.

The goal behind the district’s rate freeze is to get Padre Dam’s rates to a level that is comparable to other local water agencies within five years, Swanson said.

As the cost for raw materials and the inflation rate soared since the end of last year, so has the estimated cost for AWP escalated from about $528 million in 2019 to today’s estimate of $950 million. At end of 2021, when the Joint Powers Authority (JPA) overseeing the water treatment program was trying to lock in construction contracts, suppliers were saying they couldn’t guarantee prices for days or weeks when usually those bids were good for at least 90 days, Swanson said.

The suppliers and contractors were eventually able to provide longer term bids, but the effect was still a huge increase in the cost for AWP, he said.

Despite that higher cost, the AWP was determined to still be financially feasible when compared to the alternative, which was doing nothing, Swanson said.

In other words, staying with importing all our water and staying with sending all the region’s wastewater to San Diego’s treatment plant. “This project is still better than the do-nothing alternative,” he said.

So, yes, AWP’s estimated cost is a big number, “but it’s still a great deal for the East County community,” he said.

The project that broke ground earlier this month should be completed by the third quarter of 2025, and begin commercial operations by the second quarter of 2026, Swanson said.

As to the suggestion that AWP’s costs could be greatly reduced by merging with the city of San Diego’s water reclamation program called Pure Water, he said the efficiencies of treating the sewage, storing it, and distributing it locally makes far more fiscal sense. In addition, there’s the idea of having local control of everything rather than ceding that control to San Diego, he said.

“This allows East County residents to have a (water) source that’s going to bring a long term, reliable supply that benefits customers, residents and visitors.”

KYLE SWANSON: FACTS AT A GLANCE