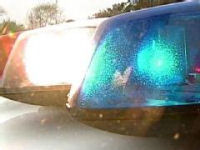 La Presa Middle School, La Presa Elementary School and Head Start are were under lockdown as of 12:45 p.m. this afternoon.