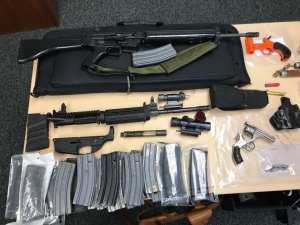 February 9, 2021 (Alpine) -- A man is under arrest following a three-hour SWAT standoff in Alpine this morning.

Around 7:30 a.m., deputies from the Sheriff's Special Enforcement Detail (SED)/SWAT tried to serve a search warrant at a home in the 4600 block of Park Lane.  The warrant was issued after deputies received reports of a man firing a gun at that address on January 25.

The Alpine Sheriff's Station's Crime Suppression Team investigated and learned Joshua Havins, 30, lived at that location.  He is a felon currently on probation and is prohibited from owning or possessing firearms under California law, according to the Sheriff’s department.

A press release from the Sheriff’s department indicates that when SED Deputies arrived to serve the warrant this morning, Havins refused to come out.  The Sheriff's Crisis Negotiations Team (CNT) was notified and responded to the scene.  Numerous attempts were made to contact Havins, but he didn't respond.  Around 10:30 a.m., Havins walked out of the house and was taken into custody.

Deputies served the warrant and searched the home, where they found several firearms along with thousands of rounds of ammunition.  Havins is being booked into San Diego Central Jail on numerous firearms-related charges.

Gotta butter it all up and that you know. No, this was likely an assault and raid all over not wearing a mask at VONS. We are moving into a totalitarian police state. And I was once so pro-LE, and now this kind of climate.
CA has strict gun laws to prevent things like this, e.g. felons getting guns and ammo! Are you telling me that criminals don't follow the law? Say it ain't so.