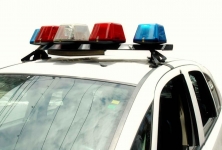 Update 4 p.m.:  A 5 ½ hour SWAT standoff in Bonita is now over. A robot was deployed inside the apartment unit just before 10:30 p.m. to check on the suspect. The suspect’s body was found inside the living room with an apparent self-inflicted gunshot wound. Members of the Special Enforcement Detail (SED/SWAT) entered the apartment and confirmed the suspect was deceased. A rifle was found next to the suspect.

The suspect is a 45-year-old Hispanic man.

Deputies with the Sheriff's Crisis Negotiation Team (CNT) and Special Enforcement Detail (SED/SWAT) are engaged in a standoff with a man in the 2900 block of Briarwood Road in in Bonita.

According to a media release, the incident started just before 5:00 p.m. when deputies received reports of shots being fired. When they arrived, they found a man suffering from a gunshot wound in the driveway of Briarwood Condos. They also saw a man running towards the apartment complex armed with what appeared to be a rifle.

Deputies established a perimeter and evacuated four units immediately surrounding the one where the suspect is believed to be barricaded. During the search of those four units, they found a woman also suffering from a gunshot wound. Another woman was also taken to a hospital for treatment of injuries sustained escaping out a window.

The wounded man and woman were both taken to a hospital for treatment of injuries that are believed to be non-life threatening at this time.

The Red Cross is providing shelter for the people who were evacuated from the four units. The temporary evacuation point is at Sweetwater Community Church, 5305 Sweetwater Road. Those who are sheltering in place are advised to keep their doors and windows closed.

Briarwood from Sweetwater all the way to the 54 is closed. SR-54 off ramps at Briarwood are also closed.

Aside from Sheriff's SED and CNT, ASTREA is also overhead. Deputies from the Santee and Lemon Grove Stations, as well as the Imperial Beach Substation are also on scene. Officers from Chula Vista, Carlsbad, CHP, National City and CALFIRE medics are assisting.

The suspect is a 45-year-old Hispanic man. Authorities say they are urging the suspect to give himself up so the incident can end peacefully.