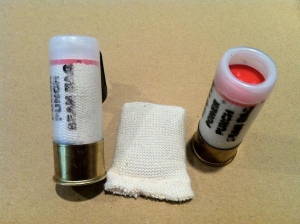 If there was ever a case where lethal force may have been justified by police, this could have been it. But despite rolling out in an armored vehicle, El Cajon’s SWAT team and San Diego Sheriff's were able to successfully end the stand-off using nothing more than a beanbag gun.

Kendrick notes that in addition to saving the children, ages 6 to 11, officers also saved the life of the suspect, who was trying to jump off a bridge from a freeway overpass when police knocked him down using a beanbag gun, after setting up barricades and forcing the vehicle to stop.  After negotiations  between a hostage negotiator and the suspect, two children ran from the vehicle into the arms of waiting officers. The other two children were found safe in the car.

NBC reports that the beanbag shot was fired by a San Diego Sheriff's officer.

Kendrick credits the officers’ training with today’s positive outcome. He recalls going through El Cajon police training as a Council member.  That training included simulations using a gun hooked up to compressed air.

“There was a report of a guy with a gun by a teller machine. I shot him and it turned out it was his wallet,” Kendrick says of that simulation.  In another, he took aim at a sniper on a building but missed several times, striking bystanders in the mock drill.  Such drills drive home the importance of using non-lethal force where possible, he believes.

Might such training help prevent instances of alleged excessive force, such as the shooting of unarmed black teen Michael Brown in Ferguson, Missouri and the choke-hold death of Eric Garner, who was also black?  In both of those cases, the people who died were not accused of serious crimes; Brown may have shoplifted cigarillos and Garner was accused of selling individual cigarettes on the street without charging taxes.

Unlike Ferguson, where street protesters were met by police in full SWAT regalia, a recent protest by 2,000 Iraqi-Americans in El Cajon was observed by El Cajon police officers on bicycles.  Protests here have been non-violent and non-confrontational.

One reason may be that authorities hold community meetings to outreach to community members in the city’s growing minority population, which is in fact now the majority.

“I think we have a really good relationship between the police and the ethnic groups in El Cajon,” Kendrick says, adding, ”There is a lot of trust there.”

While there has been controversy since Ferguson about the militarization of police forces and use of armored vehicles by local police, Kendrick says today’s incident shows that there are times when such equipment can save lives—and it’s appropriateness all boils down to how it is used.