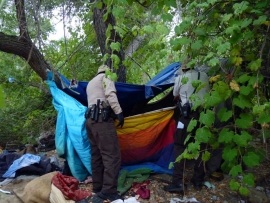 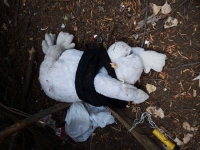 “Everyone knows that we are coming,” Lieutenant Christine Robbins said prior to the operation. “We’ve posted signs for the past 90 days…We don’t expect to find anyone there.” Signs warned that camping in the area, which includes a federal national wildlife refuge, is prohibited. Deputies have visited the encampments multiple times, with the last sign warning occupants to vacate by today. Any transients found at the camps would be arrested for trespassing, Robbins said. “They will only be able to take out what they can carry.”

Inmate work crews bagged up items found at the site in trash bags, to be destroyed.

One deputy, who asked not to be 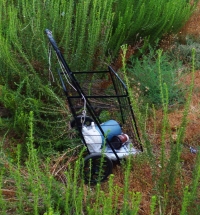 named, said he’d visited the site previously and found mostly men, along with two women. “One was 18 years old, “ he said. “She’d been through the foster care system, and then they kicked her out. She had no place to go, so she 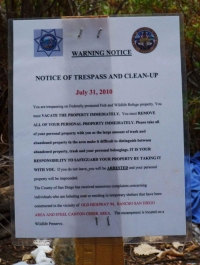 Signs were posted in English only at the site, situated in the unincorporated area of El Cajon. Deputies said the homeless here were not believed to be illegal immigrants, based on the officers prior visits to the site and conversations with individuals camped there.

Just where the displaced homeless will go next was unclear. Deputies speculated that some may have moved on farther east, into Spring Valley.

With the exception of a church-run camp in a rural area, East County has no safe haven for the homeless. In prior interviews with homeless individuals in our region, East County Magazine has learned that some prefer camping to spending several dollars a day to take a trolley to downtown San Diego, where the closest homeless shelter is located. Others have heard stories of lice-infested bedding or crimes at shelters, though the makeshift camps at this site were far from sanitary. Others may be ineligible for help at shelters due to drug or alcohol issues.

“This is our best friend,” one officer said, popping open a bottle of hand sanitizer after the raid.

A press release issued by Sheriff Bill Gore stated that there has been an increase in crime within the area “believed directly linked to the transient population.” Asked what crimes have occurred, Robbins cited “dumpster diving, thefts from condos, and vehicle 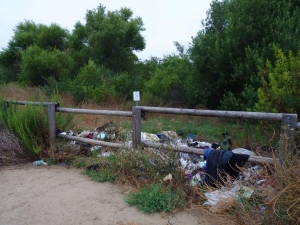 burglaries.” Asked what evidence there is that those crimes were perpetrated by the homeless, she named one example. “We have had one homeless person who shoplifted from a local business and has been caught.” None have been tied to violent crimes, she said. However local merchants have complained, prompting the sweeps.

Another reason given was “notable disturbance of endangered wildlife”, according to the Sheriff’s release. Asked what endangered wildlife inhabits the area, Fish and Game representative Jill Terp asid the least Bell vireo bird nests in area willow trees. “It’s really damaging to the habitat. They’re cutting down trees and cutting limbs,” she said. “Under the oak trees, they are trampling underneath and that can damage the roots.” 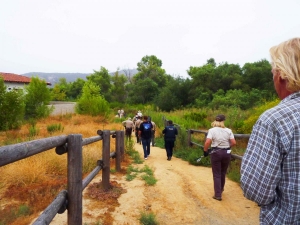 sweep. Asked where there have been reports of campfires set by homeless in this area, he said not to his knowledge. “These days, most of them are using propane stoves for cooking,” he said, adding that smoke from campfires would alert authorities to their presence. In winter, however, warming fires remains a concern in our wildfire-prone region, he noted.

Grapevines, brambles and poison oak grew wild along the trails crisscrossing the preserve, which also included towering cottonwoods, oaks, willows and a walnut tree along the Steele Canyon Creek bed, muddy in some places. One officer expressed a fear of snakes, and joked that “the first one in stirs ‘em up, the second one walks on by, third one gets bit.” No snakes were spotted at the first site, though officers said large rattlers are common near the bridge to be visited later.

Some camps spotted previously had been partially cleared out, deputies said. But clearly most were unable to carry away all of the items, or simply left them as trash. Robbins characterized the area as large a “dumping ground.” In one spot, deputies discovered a mound of sticks and branches, where someone had attempted to hide belongings including pillows and blankets underneath.

Deputy Sheriff Mike Keshka was supervising a crew of inmates from the East Mesa detention facility. Inmates helping with the cleanup are nonviolent offenders who received work credit or “good time” credit, plus 50 cents a day for their efforts. “Their main motivation is to get outside…they look forward to it,” he said, adding that most inmates find staying in a cell all day boring by comparison.