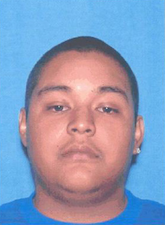 September 7, 2013 (La Mesa)- Four months ago, 22-year-old Xusha Brown Jr. was shot in the head while a passenger in a vehicle driven by Malcolm Hune, heading home on May 5 at 4:00 a.m. He lived on the Sycuan reservation, oldest of nine children, and also worked at Sycuan.

His mother, Deborah Flores, described him as “very loving, very kind hearted” at a press conference in La Mesa.

“This shouldn’t have happened,” Daniel Tucker, Chairman of the Sycuan Band of the Kumeyaay Nation, said.  The tribe has announced it will increase to $100,000 the reward money offered for information leading to the arrest and conviction of Brown’s killer. Police have indicated they believe witnesses may be reluctant to come forward for fear of safety, but that police will work to protect them.

Lieutenant Matt Nicholas with La Mesa Police Department stated, “We know it was a gang-related incident, but we don’t know the motivation or the reason behind it...We have no idea of what gang it was.”  Nicholas said Brown was not a gang member and is not believed to have been the target.  “We have reason to believe there were a number of vehicles,” he said, adding that Hune and Brown knew each other."   He told ECM he can’t disclose the type of bullet used or other details.

Brown’s mother addressed the news cameras on behalf of her family. “We want you to put yourself in our shoes...My son’s going be to be 23 on September 8. He’s never going to find out his full potential in life…We will continue to fight until justice has been done.” She added,  "We didn’t know this until the end, but he was a donor to four other people.” She said he always checked on his siblings, and “always provided for them.”

Flores told ECM she has been coping with her son’s death by taking it “just one day at a time.”

Asked if there have been any other similar shootings unsolved on nearby freeways, Lt. Nicholas replied, “Not in La Mesa.”