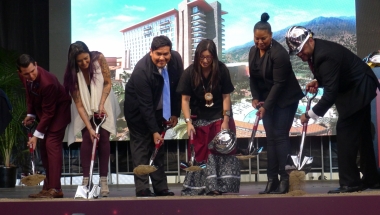 March 31, 2017 (El Cajon) –“This is truly our day. We’re here to celebrate,” Sycuan Tribal Chairman Cody Martinez told a packed house during a groundbreaking on the Sycuan reservation for the tribe’s casino expansion. 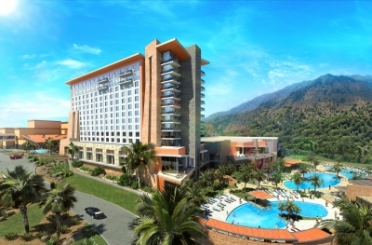 Chefs served up samples of foods at the groundbreaking event ranging from watermelon salad to seafood to  beautifully displayed and delicious deserts.

Nick Hardwick from Fox 1360 opened the event by praising Sycuan as a “passionate community” that has given back to over 700 organizations in the region annually while developing a 20-30 year plan for the future.  He quipped, “I’m looking forward to a  Staycation at Sycuan.”

Supervisor Dianne Jacob hailed Sycuan as an “outstanding partner” to the County on road improvements and coming soon, a new trail along the Sweetwater River.  She told tribal members, “Congratulations. This is a great day.” 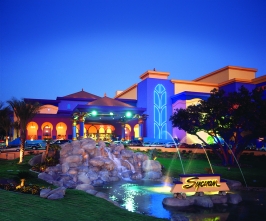 adres pitching star Trevor Hoffman and Supervisor Greg Cox, and tribal elders.  A video tour was presented, along with a new logo: “Play, win, build together.” 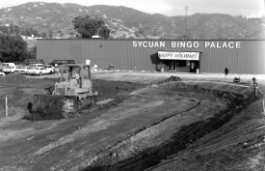 Casino manager John Dinius recalled how far Sycuan has come from 1983, when the tribe opened its Bingo Palace.   After a court decision and a ballot proposition enhanced opportunities, the tribe built and expanded its casino and next up, will open a full resort that goes far beyond gaming.  The nearby Sycuan golf course formerly known as Singing Hills will reclaim its original name along with a new logo combing the Singing Hills and Sycuan names.

Dinius noted that tribal gaming has “put people to work” employing 12,000 people in total.   Sycuan’s gaming  has benefited not only the broader community across San Diego through its many donations, but also tribal members  who have used gaming revenues for everything from “braces on children’s teeth” to  “a 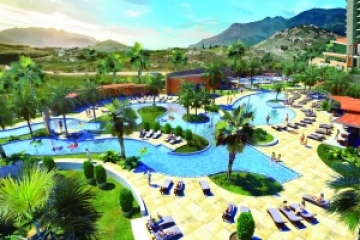 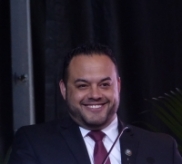 hat Sycuan is run by a handful of families who have worked hard through the years to achieve their dreams.

“It’s through blood, sweat and tears that we are hear today,” he said. “We are taking Sycuan to the next level.”