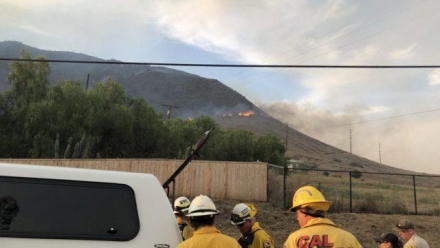 By Miriam Raftery
Photo via Cal Fire:  Cal Fire doused a brush fire in Dehesa in July, operating out of a Cal Fire station.
August 25, 2019 (Dehesa) – Going, going, gone.  A county auction sold off the former Dehesa fire station as surplus property on August 6th. The buyer is the Sycuan band of the Kumeyaay nation, which purchase the site for $650,000.
The site was donated to the County for use as a volunteer fire station in 1976, then transferred to the San Diego Rural Fire Protection District following consolidation of a dozen fire departments.  After creation of the County Fire Authority in 2008, the property reverted back to the county.
The site, located in the 5400 block of Dehesa Road, is near the entrance to the Sycuan Casino and Resort, which recently added a 12-story hotel and conference facilities.  The tribe has not yet announced whether it will retain the site as a fire station, or convert to another use.  The property is currently zoned for general agricultural purposes.
The County Fire Authority’s rollout and dissolution of volunteer fire departments has led to various strategies for dealing with surplus stations.  In Boulevard, a former volunteer station is used for community meetings.
The former volunteer station in Julian, however, remains vacant as multiple legal actions proceed, including one seeking to reverse the county takeover and another which claims the land should revert back to a Native American land trust, which received the land from a donor under the condition that it be used as a station by the volunteer Julian-Cuyamaca Fire Department.