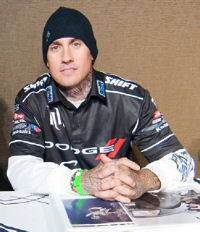 December 29, 2011 (El Cajon) -- Carey Hart, team owner of Hart and Huntington Racing, unveiled the new Supercross team riders and sponsors for the 2012 season during a press conference, Thursday, December 1 in San Diego at Sycuan Casino. The Dodge Motorsports/Sycuan Casino/Hart and Huntington/Bel-Ray Racing Team now include a brand new sponsorship with Sycuan Casino for the upcoming season and beyond, as well as, a continuing partnership with Dodge and Bel-Ray. Sycuan Casino is located at 5469 Casino Way, El Cajon, CA 92019, (619) 445-6002.

Josh Hansen, Kyle Partridge and Josh Hill will join Hart and Huntington Racing veteran Ivan Tedesco on the four-man team for 2012. In addition, Hart announced that he will be donating the bike he used at the Gravity Games in 2000 to complete the first back flip in freestyle motocross history to GameDay Sports Bar & Grill at Sycuan Casino as a token of gratitude for their support. Fans were able to mingle with the motocross stars during a meet-and-greet cocktail hour, including appearances by Carey Hart and the FMX riders.

Hart and Sycuan Casino hosted Liv Fast Moto Demo to provide a groundbreaking fan experience during the press announcement for the new team riders and sponsors. Lance Coury, Destin Cantrell and Drake McElroy participated in a freestyle demo for fans prior to the press conference.

Hart greeted hundreds of guests at the event, which included a personal tour of the Hart and Huntington rig for young tribe members of The Sycuan Band of the Kumeyaay Nation. In addition, fans were able to meet the new team riders and get autographs during an exclusive meet-and-greet hour at the casino.
“We know that motocross is a sport that resonates with our local community and are excited to partner with the most innovative team in the industry,” said Sheila Howe, General Manager of Sycuan Casino. “Our goal is to host more fun and entertaining events, like Liv Fast Moto Demo, for our guests.

The Dodge Motorsports/Sycuan Casino/Hart and Huntington/Bel-Ray Racing Team will kick off the 2012 season in Anaheim on January 7, 2012.
Hart is married to the pop star Pink and is co-owner of the Hart and Huntington tattoo shops.
To stay up to date on all Dodge Motorsports/Sycuan Casino/Hart and Huntington/Bel-Ray Racing news, follow the team on Facebook at www.facebook.com/hartandhuntington; Twitter at @HandHOfficial; and their blog at www.hartandhuntington.com.
CLICK TO VIEW VIDEO
http://www.youtube.com/watch?feature=player_embedded&v=_syqodrb7aM