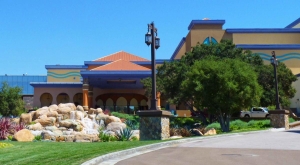 January 13, 2012 (El Cajon )—The Sycuan Band of the Kumeyaay Nation has moved a step closer to its goal of tripling the size of its one-square-mile reservation along the Sweetwater River in Dehesa.

The County Board of Supervisors, which previously opposed the tribe's plan, voted to approve the annexation after Sycuan agreed to reimburse the County about $321,000 a year in lost tax revenues for seven years. The tribe will also fund $800,000 in traffic improvements in Dehesa. If approved by the federal Bureau of Indian Affairs, Sycuan hopes to build an equestrian center, 50 houses and an RV park on the added land, which will also include the Sycuan Resort and golf course.

“We want to be good neighbors,” tribal Chairman Daniel Tucker said of the payment accord reached with the County. The tribe, which recently remodeled its casino has indicated it has no plans to expand gambling operations.