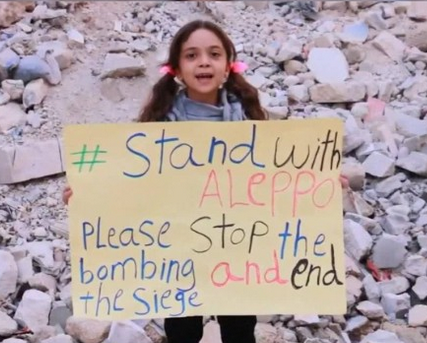 December 19, 2016 (San Diego’s East County) -- Seven-year-old Bana Alabed’s tweets during the fall of Aleppo, Syria, have drawn global attention to the plight of people trapped in the city in recent weeks, drawing comparisons to the diary of Anne Frank.  An anguished plea during recent bombings, followed by days of silence, led to concerns that Bana may have perished—but now word has come that she is a survivor.

The words of Anne Frank, a young teen girl, taught the world what it was like for a family in hiding during World War II.  Her diary wasn’t published until after the war, which she did not survive. But Bana’s diary has shown the world in real-time the drama of life in a war-torn city, through an even younger a child’s eyes.

Baba’s mother, a schoolteacher, set up the account hoping that the stories of Bana and her two younger brothers, ages 5 and 3, would help persuade the world to come to the aid of families trapped in the war torn city as a massacre of civilians was occurring.

Bana’s account soon drew over 300,000 followers on Twitter, revealing a child’s innocent scarred by the ravages of war.  Meanwhile media outlets reported on the Assad regime massacring civilians as the city fell.

In one photo tweeted from her account, Bana held up a hand-letter cardboard sign which read “Please stop the bombing and end the siege,” urging her followers worldwide to stand with Aleppo.

Some tried to discredit Bana’s family for sending propaganda.  But many more praised the young girl’s courage.

On November 29th, Bana posted a photo of her home that had been bombed, along with a moving message which read, “This is my reading place where I wanted to start reading Harry Potter, but it’s bombed.”  Her words prompted author J.K. Rowling to send a collection of Harry Potter e-books for the trapped young girl to read.

On December 1st, Bana’s tweet grew more grim.  “I am sick now. I have no medicine, no home, no clean water.” She wrote. “This will make me die even before a bomb kill me.”

Then on December 4th, Bana’s mother, Fatemah, sent a dire tweet. “We are sure the army is capturing us now. We will see each other another day dear world. Bye.”

The account went dark for days, leading to fears that the family had not survived.

But on December 19th, Bana tweeted, “I escaped from East Aleppo.”

CNN later confirmed from Turkey’s foreign minister that the family will be offered a safe haven in Turkey.

A relief worker said that Bana and her family escaped safely to the Aleppo countryside in a harrowing journey aboard a bus, with no food or water for 24 hours.  Bana’s mother sold media that she “left her soul” in Aleppo.

Despite their ordeal, Bana and her family are among the lucky ones.  On Sunday, December 17th, buses evacuating refugees were set on fire.  Others waited in freezing cold, with no shelter.

Efforts by the United Nations Security Council to secure a cease fire, even temporarily to allow for safe evacuations, have been repeatedly blocked by Russian vetoes.

So the evacuations resumed with action by the UN.  At least 4,500 civilians have been evacuated from Aleppo in recent days, including 47 children trapped in an orphanage, some in critical condition.

The war has killed at least 400,000 people and forced millions to flee their homes.

A thousand or more of the Syrian refugees have come to San Diego’s East County. Though deeply traumatized, they now have hopes to build new lives in America, as so many immigrants from around the world have done before them.