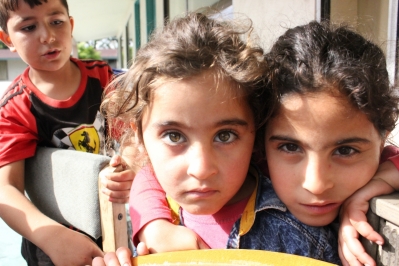 Fleeing violence in Syria, some fear homelessness in U.S.

Hear our radio interviews with Syrian refugees and those seeking to help them in El Cajon by clicking the audio link.

December 1, 2016 (El Cajon) -- Within the Villas of Embasadora, a motel in El Cajon, Syrian refugees have converted their rooms into makeshift homes where it’s cheaper for families of eight, or eleven to survive, than in San Diego’s public housing where costs have risen sharply. 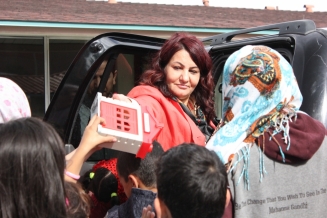 In between parking spaces and amidst broken Legos, a young Syrian girl plays with a beheaded Bratz doll. Styrofoam cups of coffee rest atop outdoor air conditioning units, where Syrian elders congregate to smoke cigarettes. Behind hotel rooms, socks are interwoven in between chain link fences, and shirts sway in the wind as they hang to dry.

Jalal Shakir’s family was taken from Syria to Jordan, then brought to the U.S. For a $120 a day, Shakir rents a hotel room because they can’t find an affordable space to live for 11 family members. The refugee resettlement program has failed to take care of them, Shakir said. He’s been here for 15 days with kidney failure and diabetes, but the refugee resettlement officers stopped answering his phone calls. 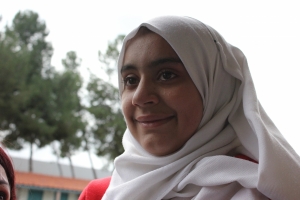 Rasha Al Bualdany traveled from Homs, the third largest city in Syria, that was engulfed by flames. She’s lived in the U.S. for 8 days, and hasn’t seen a life outside the hotel commune, or even the streets of El Cajon. Al Bualdany wants a better life and education for her kids, but she’s pained by the life left behind in Syria, such as her mom, brothers and sisters.

Mustafa Al Jassim is scared his family will become homeless. He wonders why the refugee resettlement program, knowing they cannot afford housing, brought them to San Diego. They want to be contributing members of society, but it’s torture being confined to a hotel city, without speaking any English, Jassim said.

“We escaped there, and we were so scared, but now we’re facing different kinds of challenges. We’re so scared because the refugee resettlement gives us $1,100, and we’re a family of eight. How can I pay the rest of my rent?” 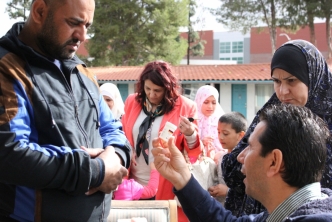 The stereotype of Syrians strapped with bombs looking for violence is not them. They have suffered at the hands of terrorist organizations, Al Jassim said. These organizations came from the Gulf countries looking to traffic humans. With tears filling his eyes, he admitted selling his 11 and 12 year old daughters, because with the war, the family was too poor to feed all of his children.

These organizations take advantage of our broken, starving communities, who were close to death. We didn’t even have money for one meal, he said. There aren’t human rights in these Arab countries.

“That’s why we came here because they respect human rights. We are people, so people are human. Nobody hurt us as much as Islamic country hurt us. America is the only country [where] we saw respect,” he said.

As Sidra Jasim’s family sought refuge in Turkey, she went to find normalcy at school. Jasim’s classmates told her Syrians were destroying their country, and her family was not welcome. They told her to go back to her country and die. Jasim’s white and pink flowered hijab covered only her hair and neck, but her eyes piercingly longed for education and acceptance.

“We don’t wish the same experience happening in Turkey will happen in America. I hope the violence we experienced in Turkey, we will not experience the same thing in the United States, and nobody will tell us [to] go back and die in your country,” Jasim said.

Translator Dilkhwaz Ahmed started a non-profit organization called License to Freedom that provides daily necessities for refugees. She fills her black Ford Sport Trac with toys, clothes, feminine products and food, twice a day. She brought them camping stoves and electric teapots, so they can cook for their kids three times a day. They need doctors, psychologists, social workers and real estate agents, she says, to help them assimilate into the community.

The acculturation process, Ahmed explains, not only involves adjusting physically and psychologically, but refugees need help navigating transportation systems, learning personal hygiene, understanding proper manners and using playground rules for kids. She understands these perils of existence because she moved here 15 years ago from Iraq as a refugee.

“My main goal is to have each American adopt one Syrian family, take them to doctors, they have food stamps, just supporting them with after school programs, walking them to the beach once a month, once a week, tell them this is who we are, this is America, we love you, just teach them English, show them the culture of America,” Ahmed said.

Fakhir Rahman is a volunteer doctor with License to Freedom. He came to America as an Iraqi refugee with his wife and two kids. Through the public consulting group, a welfare to work program subcontracted by the county, refugee doctors and engineers work alongside License to Freedom to help newcomers assimilate.

“As you see when we talk to a little girl, she just starts to cry, even with a smile on her face, but she cries about what she saw. She described her little sister cannot talk because she saw in front of her ISIS killing and beheading a lot of people in front of her. She saw blood. She stopped talking,” Ahmed said.

Ahmed calls on the community to adopt a refugee family, or donate any form of necessities. All people deserve dignity and respect, she says, and they deserve somebody to value their existence for the first time. They deserve to be called by their first names, not Syrians, and they deserve to have their needs acknowledged. For donations or questions, call 619-401-2800 or visit www.LicensetoFreedom.org.