August 1, 2018 (El Cajon) – Houda Al Sidnawi arrived in the United States in 2016 with both of her parents and her two younger sisters, now 16 and 10. The family left Syria in 2012 at the brink of the civil war and immigrated to Egypt where they obtained appropriate documentation to enter the United States on refugee visas.

Today, Houda and her family live in El Cajon. But her older brother Ahmed was not able to join them due to the Trump administration reversing an Obama-era decision to admit 10,000 Syrian refugees. Houda has also been apart from her fiancée, a Syrian engineering student living in Egypt. The two met and got engaged before Houda came to the United States.

Her brother, Ahmed, left Egypt in 2013 for Turkey, where he hoped to pursue an advanced education. Due to financial hardship, he ended up working in Turkey where he still resides, stuck in a limbo as he waits on his documentation to be approved so that he can join his family. 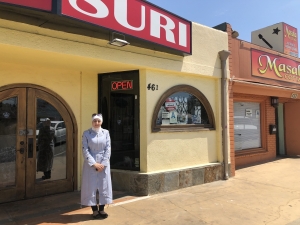 The family has been separated from him for over five years. They have told their story among the activist community, spoken with congressional representatives, and talked with multiple immigration attorneys.

Houda recently completed her high school degree and has been attending community college, hoping to pursue an Associate’s degree in English so that she can continue to further her studies with a good grasp of the language.

She has stayed busy giving lectures hosted by SDSU and other organizations about her experience as a refugee and talked about her home country in classes of local Arabic-learners who want to know more about the Middle East.

Her father, who was a hairstylist and barber in Syria for 30 years, hopes to improve his English skills so that he can enter the workforce in his career.

Her mother hopes to pursue childcare as she is often looked upon locally as a caring figure who watches many children in her neighborhood and community. She is also an excellent cook and has been asked to help cater a few Middle Eastern events.

Houda plans to return to Egypt this year to get married and hopes that her future husband will be able to obtain a permanent visa to follow her back to San Diego so the two can start their lives together.

The separation from her brother and fiancée has caused Houda great anxiety. This anxiety is common among refugee communities who were forced to leave their homes amidst strenuous conditions and relocate in places where they often face discrimination or separation due to changing immigration policies, according to the United Nations.

According to the United Nations High Commissioner for Refugees, the Syrian conflict has resulted in the largest refugee crisis since World War II. The UN conducted a study on Syrian refugees in Jordan, which found that “the absence of key family members exacerbates financial burdens, resulting in increased stress, child labor, debt accumulation, and strained relationships with host communities.”

“We’re so thankful for this opportunity,” Houda said of the U.S. for granting her entry to America. But she adds, “Please, if you’re going to bring someone, just let us complete the family.”

Seems to have a bucket list - reverse everything President Obama did during his 8 years of working so hard for the American people. Why does Trump appear to dislike immigrants so much, particularly Muslims? Sad.