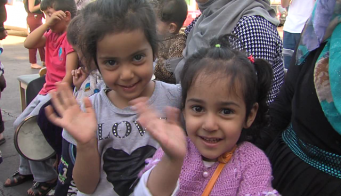 November 25, 2016 (San Diego’s East County) – The youngest survivors of Syria’s civil war are a traumatized generation.  In the U.S., 80% of the 10,000 Syrian refugees admitted in 2016 are children—and nearly all have suffered unspeakable trauma.

San Diego County has taken in 676 Syrian refugees, more than any other county in America.  On Thursday, local residents welcomed the newcomers with gifts and turkey dinners, generating gratitude among refugees overwhelmed by such kindness.

“We love you, American people, for allowing us to come to the safety of the United States,” one refugee woman told 10 News, speaking through translator Dilkhwaz Ahmed at a Thanksgiving event in El Cajon. Broad smiles revealed joy on the faces of Syrian children, who have found temporary safety at a motel in El Cajon with a group of 100 refugees straight from war-torn Syria.

They are among the lucky ones.

According to Business Insider, 80% of Syria’s children—8.4 million tiny victims—have been harmed by the war.  At one refugee camp, 79% of the children had lost parents.  Humanitarian aid is desperately needed to save 6 million children left in Syria; 4,500 children have died in Aleppo air strikes.

Some have witnessed torture, or been tortured themselves, according to Dalia Mohammad, a volunteer with License for Freedom helping out at the Thanksgiving Day celebration in El Cajon.  She says she is happy to give back this Thanksgiving, after coming here herself as a refugee a decade ago.

Meanwhile Mike Glanz, chief executive officer of HireAHelper, sent a bus to bring Syrian families to his office in Oceanside for a Thanksgiving potluck dinner to “do our little part to helping bring them into our culture and welcome then,” he said, KPBS reports.

That kind gesture meant a lot to Yahya Assad, who endured torture in detention after his home in Syria was shelled.  He said he was beaten so badly his young daughter didn’t recognize him at first.  The family fled to Jordan, but was never invited to anyone’s home and did not feel welcomed there.  “Before, I felt like there was no dignity,” he said, adding, “Now I feel like I have some value as a human being.”

The first Syrian refugee resettled in the U.S. as a result of the war was NadimFawzi Jouriey, who came to El Cajon earlier this year with his wife and four children, ages 8 to 14.  He calls America a “beautiful country” because of its treatment of newcomers. “When you go down the streets, everyone smiles at you,” Associated Press reported.

Whether future refugees from Syria will have such hope or not is dependent upon President-Elect Donald Trump, who has called President Barack Obama’s promise to accept 65,000 refugees a “Great Trojan horse.”

Refugee relocation is determined by where refugees have families.  If they don’t have relatives in the U.S., then they are sent to cities with established immigrant communities that share their culture. El Cajon has become a haven first for Iraqi Chaldean Christians and later, other Middle Eastern refugees, including Muslims.  Many teachers, shopkeepers and others here speak Arabic; police reach out to help refugees understand the laws.  Churches, mosques, and nonprofit organizations all work to help the new refugees.

During the first week of school in El Cajon, 76 Syrian children were enrolled.  The Cajon Valley Union School District offers one-on-one orientations to introduce families to teachers and staff, also offering newcomer classes for refugees and counselors to help students who have endured trauma.

For Jouriyeh and his family, the future is now one of hope, not despair.

“We hope our children succeed in education and [will] be able to have a good future here,” he concludes.