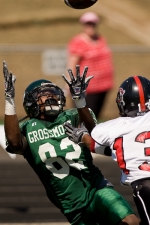 In addition to Grossmont, Smith played with the University of Oregon, and was a 1999 first-round draft choice by the Cincinnati Bengals. He spent four seasons with the Bengals before playing for the Frankfort Galaxy in NFL Europe and the Calgary Stampeders of the Canadian Football League. He joined the Grossmont Griffins football coaching staff in 2008.