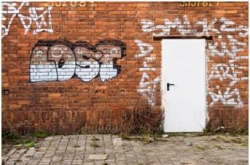 Through information from witnesses and other evidence, Santee deputies obtained search warrants for two suspects’ residences in Santee. Evidence discovered led to arrests of the two initial suspects and numerous other “taggers” believed responsible for approximately 100 graffiti vandalism crime cases in Santee.

The City of Santee Public Works Department has estimated the cost to repair the damage is in excess of $24,000. By working with City crews on the graffiti abatement project, the arrest and prosecution of the vandals will lead to restitution and the City's ability to recover the cost of the repair and repainting of community property, Sheriff Bill Gore predicts.