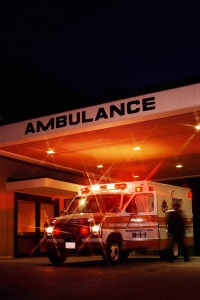 March 29, 2015 (San Diego)--San Diego County only requires that ambulances response within 30 minutes in rural areas, unlike urban areas where the limit is 10 minutes. The American Heart Association reports that brain death and permanent death start to occur in 4–6 minutes after someone experiences cardiac arrest.  The County's response time requirements are far too long for a heart attack patient to survive without brain damage. In addition, these times mean it sometimes takes more than the "golden hour" to reach a hospital following a trauma, stroke or other medical emergency, the time frame that medical experts recommend for saving lives.

I am personally aware of cases where people died or nearly died due to extremely slow response times. Nearly two hours in one case.  The response times along highway 94 are particularly torublesome, and also portions of 8 in the eastern areas and towns along that southeast quadrant.  I'm not talking about people living on a mountaintop or in a box canyon. These are people who lived in towns or within 5 minutes of a major highway.

Part of the waterfront park was from grants but some was general funds that could have been used on emergency services.  Certainly we shouldn't spend money on a stadium if we can't get amubulances into towns or even to accidents on our highways in a timely enough manner, at least that is my view.

never mind.
it is a national standard. This is based on the average number of fire stations you have in an area and the distance they have to travel to rural calls. It is also based on how frequently you will use these assets. Higher response times for all emergency services are standard across the country. In fact, EMS has been able to cut response times to 10 minutes or so in many areas of the back country, which is actually half the national standard set by DOT. As to the downtown park, I know we have had this discussion in the past, but parks are a completely separate area of the 5.03 billion budget (as of last year), from emergency services. What is assigned to parks and recreation is usually not moved, unless there is a major emergency in which funds have to be moved, temporarily mind you until the county is made whole by state and feds, to pay for that emergency response. An example of this would be the Harris fire, or last May's Cocos Fire and the rest of the complex. These moneys are also used to maintain things like all the parks in the back country that the county owns. They are not just the downtown park, which serves a lot more people than just the supervisors, but last week had a music show enjoyed by thousands of San Diegans. I am betting a few people came from the back country to that event. Here is the comprehensive list of County Parks. http://www.sandiegocounty.gov/parks/parklist.html

and a waterfront park around the County administration center where Supervisors meet, they should be spending money on more ambulances and fully staffing every fire station instead.

The training required is almost to the level of a Registered Nurse.
The east county is a large area with many small communities that don't have the tax base to support fire and ambulance service. People depend on friends and neighbors for support during an emergency. Fire stations are staffed by volunteers. The problem is where is the funding?

Here is a better poll"

Considering our elected "officials" should we:
1) Give them a pay raise for doing a good job?
2) OFF WITH THEIR HEADS?