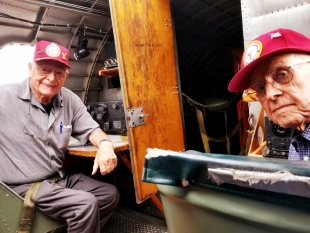 October 9, 2018 (El Cajon) – Aboard an exhilarating flight on a World War II B-17G warbird named the Sentimental Journey, WWII veterans told spellbinding stories about their experiences as combat pilots and prisoners of war.  This peace-time flight out of El Cajon’s Gillespie Field was offered on October 1st  to members of the press and public, thanks to the Arizona Memorial Museum’s staff and flight crew.

For many guests, it woulld be a new experience entirely. But for two WWII veterans, it was a ride on a plane that was familiar. Both were pilots; one flew a Lockheed P38, performing missions during WWII over Greece and France.

“I was on my 11th mission when I got shot down on a strafing in Greece,” said WWII pilot Bill Milton, 95, a P-38 pilot, “I was coming in low to see if I could hit as many airplanes and buildings as possible--try to hinder their ability to operate off of their air field.” 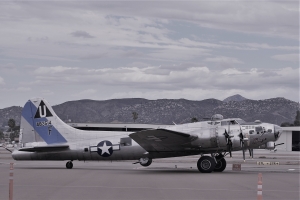 Milton became a prisoner of war or POW.  He was transferred from Greece to Stalag Luft III in Germany, where he was imprisoned for seven months.

“Food was scarce.  You are living in conditions where you are guarded all the time,” continued Milton, “When I was in SLIII. General Patton’s 3rd came through the area.  I was liberated April 29, 1945.”

Fellow WWII pilot Ed Davidson, 95, recounted, “Everything happened in a couple of seconds, we were flying very low to the ground. The ground fire took out my left engine.”He, too, became a POW.

“In April we started hearing the guns, so by May 1, ’45 the Russians liberated us,” explained Davidson. “They put 30 POWs on each B-17 and flew them to allied military camps; we were at Camp Lucky Strike.  The camps were part of the “cigarette camps” Allied tent camps – Camel, Old Gold, and Marlboro.”

Debbie English said, “We’ve worked very hard, for six months, to get them here, referring to the Arizona Commemorative Air Force (CAF) Museum crew and the B-17G. English is the adjutant and membership officer for Air Group One based out of Gillespie Field. She and her husband, Doug, were both on hand to greet the crew of the Sentimental Journey.

Air Group One was formed as the “San Diego Squadron” of CAF in 1981; they were renamed Air Group One two years later.  They have a hangar and WWII museum, which are just part of what their work involves. Their aim isto maintain and restore WWII aircraft, provide memorial flyovers at events, and provide support and a presence at Southern California air shows. The organization brought the Sentimental Journey to the airport and offered rides, for a fee, in the warbird.

Crew members like Ed Campbell, COL CAF, crew member and private pilot Stephanie Meier, were just a part of the professionals that commanded this memorial ride for the WWII vets and others. Seats were in the nose section, the radio room, and in the waist compartment.

The veterans rode, along with other crew and guests, on a 20-25-minute air tour over East County. The roar of the engine, images of the propeller and the sky beyond induced an adrenalin rush and a sense of what it must have been like riding in this aircraft during wartime. But on our flight, passengers need not fear being shot down by enemy aircraft or taken prisoner.

For more information or to purchase a ride, visit:  www.FlyingLegendsTour.com.

To find out about future flight opportunities, or to support their fundraisers, you can find Air Group One at www.ag1caf.org.