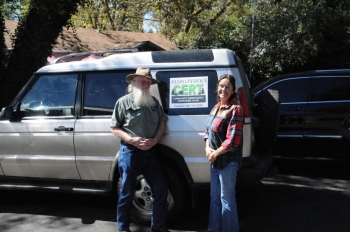 October 18, 2014 (Julian)--Community Emergency Response Teams (CERT) are locally-based volunteer teams, there to assist in times of disaster. They are locally managed and they almost always are sponsored by an agency.

Brian Kramer, current administrator of Julian-Cuyamaca Fire Department-sponsored CERT team, told ECM that the County did not recognize a second CERT team in Julian sponsored by Johnny and Dianne Hake, since that team is not affiliated with any government agency.

The Hakes said they operate independently and that they broke off their relationship with the Fire Department over philosophical differences.

After talking with Kramer, we asked the County of San Diego. We confirmed that Kramer leads the team recognized by San Diego County Office of Emergency Services (County OES), and by the federal government.

But the details are not crystal clear.

Per the FEMA CERT guidelines, the Julian Cuyamaca Resource Center CERT Program does not have a recognized partnership with a “local government, emergency management and response agencies”, and is currently not eligible to participate in the California State Disaster Service Worker Volunteer Program.  (http://www.fema.gov/community-emergency-response-teams/frequently-asked-...).

As the Julian CERT program sponsored by the Julian-Cuyamaca Fire Protection District (JCFPD) has a recognized partnership with a local government, emergency management and response agency, San Diego County OES administers the Disaster Service Worker Program for the Julian CERT members.  In accordance with FEMA guidelines some CERT programs do operate without a government-sponsoring agency, but they are not eligible for coverage under the California State Disaster Service Worker Volunteer Program.

Because the program run by the Hakes is operating without a sponsoring agency, they are no eligible for the California disaster volunteer worker compensation program. Therefore, they are covered under the Good Samaritan law, but not other state programs. That said, this matches what they told us and the list of partner agencies. The County Offices of Emergency Services is not on the list provided by the Hakes.

The relationship between all involved is very tense.

To be specific, relationships between all involved are better described as a very nasty divorce, and each claims to be the official team. The  Julian team, not associated with the Julian Cuyamaca Resource Center (the Hakes’ team), has an Area of Responsibility (AOR) that matches that of the Fire Department.

This is where the tension originally started, according to the Hakes. When Chief Rick Marinelli came in, he wanted the team to limit operations to just his area of responsibility, but the Hakes, who have been doing this for close to 10 years, wanted to continue working with other communities, including Shelter Valley.

In the end, the Hakes broke their relationship with the Fire Department, a split which started with retired Fire Chief Kevin Dubler.  But the Hakes would like to resolve some of the strained relationship with the fire department since in case of a real emergency, they recognize this could be a problem when assisting the community.

The Hakes say they chose to go their separate ways, but other sources say that they were dismissed.

The Hakes also said they relieved Kramer from the board of the non-profit they run, and claim they did this with advice from a lawyer. Kramer says that this was done illegally with clear violations of the Brown Act. Given that the Hakes have gotten community redevelopment grants, some of their actions are covered under the Brown Act, those specifically related to those grants. According to the Hakes, part of the conflict was over some equipment that belonged to the Resource Center, mostly radio equipment.

Regardless, what we were able to find on the Brown Act and non-profits makes this part of the argument clear as mud. It might apply to the Resource Center, due to the fact that the Center has received county grants: http://firstamendmentcoalition.org/2013/07/aa-when-does-a-non-profit-fall-under-the-brown-act/

Still, all this led to a small claims lawsuit, over equipment that the Hakes said belonged to the Julian-Cuyamaca Resource Center.The Kramers won that case; the court judgment from September 25th reveals:

The Court finds judgment on the Amended Plaintiff's Claim and Order to go to Small Claims Court for Brian Kramer, Kathryn A Payne and against Julian Cuyamaca Resource Center Inc, DBA CERT Julian in the amount of: $0.00 principal, $0.00 costs, $0 pre-judgment interest. TS-790 is to be returned to John Hake, and the additional equipment is to be given to Greg Hidley in trust for Plaintiff.

The plaintiff is the Julian- Cuyamaca Resource Center. While Kramer said that the only thing that Johnny Hake got back was the radio, and nothing more, and the rest was put in trust, Hake said the equipment was returned to the JCRC. So in a way, both are telling the truth as they see it. From what we can figure out, all parties agree that the rest of the equipment was placed in trust, but what this trust means might remain in question.

The short answer? We do have formal agreements in place with (both) Julian CERT teams. At the time of the Banner Fire in July 2014, Johnny & Diane Hake did have their formal agreement in place, the team was trained and had their badges. Activation was done simultaneously. They were ready to respond and did so in line with the agreement we have with them (the copy of the agreement I have is dated June 24, 2014 and is a Community Based Partner- Shelter Personnel Agreement).

She also stated that the American Red Cross has agreements with over 70 community partners, and as long as they all follow the protocols and standards, “it is a win-win for all of us.”

Over the last few years, the community of Julian has become increasingly divided over emergency services, whether it is volunteers in dueling CERT teams or retaining the independence of the Julian-Cuyamaca Fire Department, a controversy that ECM has previously covered.

In this messy situation, only one thing is clear: in case of a major disaster, everybody will have to pull together—since as the community has learned in the past, help in the mountain community of Julian is not just around the corner.

He fought the system and got things done. I am sure Julian will miss him.

Do you have any details on his passing, for those who knew him?

Hopefully when the need arises...the Fire Fighters can reach the areas of concern quickly. Rescuing and assisting those in need should be a priority for each INVOLVED. Beauracracies and committees tend to slow down management issues. Let's keep an accurate focus.