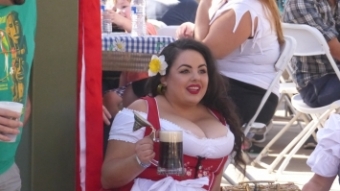 October 7, 2017 (El Cajon) – Crowds flocked to Oktoberfests in El Cajon and La Mesa for bratwurst, beer, and festivities. The two community events differed sharply, with the German-American club’s event at its headquarters in El Cajon focused on authentic offerings such as a German band and Bavarian pastries, while La Mesa added some international elements and carnival attractions. 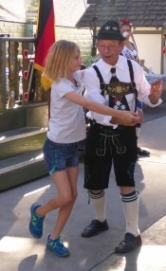 In El Cajon, we savored bratwurst with red cabbage and potato salad ( 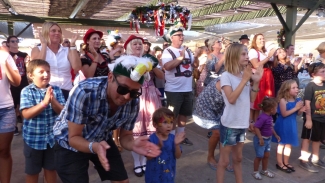 In El Cajon’s big beer garden, many were dressed in Bavarian attire.  A man in German liederhosen pulled frauleins and kinder (women and children) from the audience to learn the lively steps.  Before I knew it, I was being twirled across the dance floor to the sounds of tuba and accordion music from a live Bavarian band.

Another popular activity was the chicken dance, where a large crowd wiggled elbows like wings and strutted around, some wearing chicken hats.

hoops were also present, along with a Ferris wheel, big stuffed animals and

Each event also had vendors.  Most, though not all, in El Cajon hawked German-themed souvenirs, from beer steins to Alpine-style caps and chicken hats, though you could also purchase jewelry, quilts and more.  La Mesa had more vendors, many of them offering up crafts.

Both events  offered contests, including a beer barrel hoist in La Mesa and a nail pounding contest in El Cajon.

This is the second and final weekend of El Cajon’s big bash, which concludes Sunday, while La Mesa’s ran last weekend.

We couldn't resist bringing home some Bavarian pastries from the El Cajon Oktoberfest to savor later at home.

If you missed the fun and frolicking, there’s always next year!