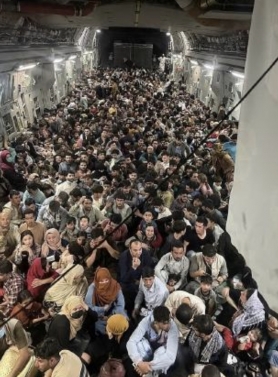 Warnings are also circulating locally of scam artists targeting people seeking to evacuate or help family members to do so.

President Joe Biden pledged during his campaign to remove all U.S. troops by the 20th anniversary of the 9/11 attacks which prompted President George W. Bush to launch the Afghanistan invasion targeting Osama bin Laden, mastermind of the 9/11 terrorism attacks in New York and Washington D.C.  During the Obama administration, bin Laden was killed by special forces, but troops remained in Afghanistan during the Obama and Trump administrations.  Trump pledged to withdraw troops and forged an agreement with the Taliban, freeing some Taliban fighters, but never ordered the Pentagon to pull out troops nor begin evacuation of Afghan allies.

Biden’s recent order to withdraw troops in fulfillment of Trump's agreement has led to chaos including heart-wrenching scenes of Afghan citizens flocking to the Kabul airport, trying desperately to get onto U.S. planes departing the country.  While 640 evacuees were crammed into a C-17 U.S. aircraft and evacuated, as well as aboard other aircraft, TV news reports revealed several clung to wings of the aircraft and fell to their deaths; another was found dead in the wheel well of a U.S. plane. While protests against the Taliban have erupted in several Afghan cities, the Taliban has responded with brutality, firing into a crowd of protesters in at least one instance.

Biden has indicated surprise over the speed at which the Taliban regained power, even before the U.S. troop pullout was complete.  He drew widespread criticism for an ABC interview with George Stephanopoulos  in which he stood by his decision, largely blaming Afghanistan’s president for fleeing the country and failing to pay Afghan troops, though  an article in GovExec indicates the Special Inspector General for Afghanistan Reconstruction warned for years about “ghost soldiers” listed who did not exist, due to Afghan leaders’ corruption.  Biden has since said he will keep U.S. troops in Afghanistan beyond the August 31 deadline until all U.S. citizens can be evacuated and the Pentagon over the weekend deployed additional troops to aid in that effort.

“We’re going to get everyone out that we can possibly evacuate…and I’ll do that as long as we possibly can,” defense Secretary Lloyd Austin III said in a briefing earlier this week. “Until the clock runs out or we run out of capability.”

The 20-year war has cost over $2 trillion, Associated Press reports. According to AP, the war has killed 2,448 U.S. military members through April, as well as 3,846 U.S. contractors, 1,144 allied service members including NATO forces, 444 aid workers and 72 journalists. Casualties on the Afghan side were even higher – an estimated 66,000 Afghan military and police officers died, as well as 47,245 Afghan civilians, and 51,191 Taliban and other opposition fighters.

But the U.S.-led invasion also led to increased human rights for women—rights swiftly being taken away as extremist Taliban forces last in control from 1996 to 2001 regained power with stunning rapidity in the last two weeks, raising additional concerns among human rights advocates for the fate of women, particularly those advocating for women’s rights. Taliban leadership has pledged a return to Sharia law and despite promise to include women in a new Taliban-run government, Taliban forces are reportedly going door to door, capturing or executing those who have helped Americans or been outspoken in advocating for women’s rights.

San Diego’s Republican Congressman Darrell Issa has been sharply critical of Biden’s actions. Issa, a senior member of the House Foreign Affairs Committee, issued a statement demanding that Biden answer “critical questions about his leadership failures in Afghanistan” and why a “coherent plan for success” appears not to have been formulated. Specifically, Issa asks:

Issa has also called on Speaker Nancy Pelosi to reconvene Congress to hear testimony and conduct oversight on the collapse of Afghanistan, including hearing testimony from cabinet secretaries.

He puts blame squarely on Biden. “His claims that this was unavoidable, or part of his planning are ludicrous. Yes, America eventually had to leave Afghanistan—but on America’s terms, not the Taliban’s.”

San Diego Congresswoman Sara Jacobs, a Democrat, has also raised concerns.  A member of the House Armed Services and House Foreign Affairs committees, she authored a letter signed by 47 House members seeking answers on the Biden Administration’s plan to evacuate U.S. citizens, Afghan allies and their families, women, nonprofit workers, journalists and others.  The letter states, “It is this Administration’s moral obligation to leverage all available resources to help as many people as possible to safety in the United States. There is no time to waste.”

Jacobs had earlier raised concerns over safety of Afghan allies in letters to the White House in April and again in June.  She pledged cooperation of her office to aid constituents seeking help for people left behind in Afghanistan,  but indicated, “Our staff cannot adequately do this without a clear understanding  of the process and plan currently underway.”

Her letter asked a series of pointed questions ranging from how the State and Defense departments are defining who is “at risk”, whether women’s rights activists will be granted protection, how people eligible for evacuation are being notified, how airport security can be provided and what resources the administration needs to expedite evacuations of Americans, Afghan allies, and other vulnerable individuals.  She also asked for a classified briefing.

While Jacobs stated in another press release this week that she agrees with not keeping troops on the ground forever in Afghanistan and supports withdrawal of troops, she adds, “The priority right now has to be evacuating as many people as possible as quickly as possible. The White House needs to cut the red tape, work with us in Congress, and do everything we can to get those fearing for their lives out of harm’s way.” 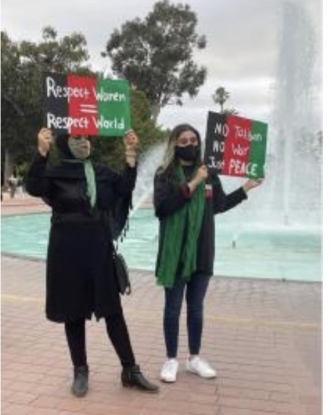 In San Diego on Aug. 19, a candlelight vigil in Balboa Park drew demonstrators standing in solidarity with “innocent lives lost” in Afghanistan.

Dilkhwaz Ahmed, an El Cajon human rights advocate and winner of a humanitarian award from the United Nations’ San Diego chapter, was among those joining the candlelight vigil to call for respect for women in Afghanistan.

Amanda Matti, a U.S. military veteran and author who residents in East County, has warned on Facebook that scammers are promising U.S. vistas or evacuation from Afghanistan for a fee.

She posted these legitimate links for those seeking help, noting that the information is over encrypted channels to protect privacy:

Those in Afghanistan who do not have a U.S. passport or green card:  http://bit.ly/AfghanEvacRequest

She also offered these warnings for those in Afghanistan who may be in danger:

Do NOT try to get to the airport. Shelter in place and wait for a phone call or email from one of the folks who will get the forms you submitted. Delete your digital history – delete facebook accounts, twitter, etc…. Anything that connects you to the US needs to be deleted. Keep Green Cards, US passports, etc… well hidden and know how to quickly erase your phone. If you have paperwork, badges, documents, etc… proving your work with US forces or companies, take photos of everything and email to someone you trust outside Afghanistan, then bury or burn the originals.

To keep up with current efforts to evacuate those at risk, Matti recommends following these Twitter feeds:

Matti adds to those at risk, “Stay safe and Godspeed.”

Doctors Without Borders has set up a website to accept donations to fund medical care for the growing number of injuries as conflicts escalate in Afghanistan:  https://www.doctorswithoutborders.org/what-we-do/news-stories/news/afghanistan-sustaining-urgent-medical-care-conflict-flares-across?gclid=Cj0KCQjwpf2IBhDkARIsAGVo0D0VWy6-zjfMFlpH6V7gXDoY33VAmaEAWPNw7YRKZ_fDlZHHQnlO5TYaAsF0EALw_wcB#p1?source=ADD2108U0U10&utm_source=google&utm_medium=cpc&utm_campaign=BRAND.DWB_CKMSF-BRAND.DWB-GS-STLK-ALL-VAR-BO-ALL-STLK-AfghanistanCrisisSTLK-LEARN

tRump started this....."Trump & Co. engineered the pullout from Afghanistan. Now they criticize it"....."TRUMP HOPES NO ONE REMEMBERS HE PUSHED FOR A FULL AFGHANISTAN WITHDRAWAL IN JUNE"......https://www.vanityfair.com/news/2021/08/donald-trump-joe-biden-afghanistan...... blame the correct person tRump!.
Pleasantly surprised to see that you've decided to comment on this dumpster fire and illustrate the blatant incompetency of the current administration. I'll give kudos for not trying to blame Trump for this mess, although I can only imagine the tone of this article had he still been in office. Joe's got blood on his hands now Miriam, when can we expect to see the calls for his impeachment? Biden sets the proverbial house on fire (on purpose) and then informs the people trapped inside that they can “get out if they really want to...” As soon as the gringos and the international press leaves, the real atrocities begin, you can be sure of that. The "Tollybahn" are presently hunting down American sympathizers and our commander in chief has been chillaxin out at Camp David hiding from the press, who've all of a sudden been given the green light to pull the knives out on him. But hey, no mean tweets!