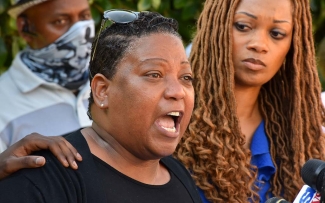 Photo:  At a La Mesa press conference in June, Tasha Williamson called for the firing of Matt Dages, the arresting officer of Amaurie Johnson “because he lied on his report.” On Monday, the District Attorney’s Office charged him. Photo by Chris Stone

January 4, 2021 (San Diego) - Tasha Williamson, the social justice activist who ran for San Diego mayor and who also organized racial justice protests in La Mesa, San Diego and other communities, was recovering at home Monday after a frightening bout of coronavirus that saw her thanking ICU staff.

On Christmas Eve, she said on Facebook that she and her son, Caleb, had gone to an unspecified emergency room the day before.

“They contacted me tonight and I am COVID19 positive,” she wrote. “They didn’t test Caleb, but believe he is positive too. … It hit me like a freight train. My chest tightness was unbearable yesterday. I am being asked to reserve all my oxygen.”

She alluded to coronavirus testing data for people of color not being accurate.

“We both went in with symptoms and they tested me and refused to test him,” she said.

Williamson didn’t respond to a Times of San Diego request for comment, but a friend who texted her Monday said: “She’s very tired but resting at home.”

“People coded blue, and I had just left the location they were coding,” she said. “Please stay in because they are running out of the very oxygen keeping my lungs going right now!”

She repeatedly urged her Facebook followers to stay home, mask up and socially distance.

“Six feet ain’t enough feet!” she said. “If you’re sick, get tested! Keep others safe — this is horrible feeling!”

The homeless advocate, who has been raising money for shelter, added: “If everyone got paid to stay at home, the unsheltered were placed in hotels, business got money to close, our [virus] numbers would go down! Sometimes, I wish they’d act like THE PEOPLE was the airplane, bank and car industry [they’re] so use to bailing out!”

She concluded: “I’m celebrating the New Year alive, resting in God’s Power and thankful for all the love and positive energy that surrounds me and my family! Especially, thankful to the ER and ICU nursing staff, at the hospital!”

Hundreds of people posted comments, wishing her well and a speedy recovery.

On Monday, Williamson, 48, updated her health status and rejoiced at news that a fired La Mesa police officer was facing charges of falsifying police reports over the May 27 arrest of Amaurie Johnson.

She said he heart rate was elevated, but “oxygen is good! I can’t even tell you how I am weeping for the loss around me and rejoicing for but one of many justices beginning!”